A visitor Guide to Orford in Suffolk

A visitor Guide to Orford in Suffolk

THERE ARE FEW PLACES BETTER ON THE SUFFOLK COAST TO ENJOY THE BLUE SKIES AND SUNSHINE THAN ORFORD, with its EXCELLENT LOCAL FOOD AND PEACEFUL ATMOSPHERE.

Arguably one of the prettiest villages on the Suffolk Coast, Orford is a true historical gem. From its castle, pretty cottages and welcoming pubs to the picturesque quay offering river cruises and the home of Pinney’s delicious smoked fish and the Pump Street bakery, it’s an ideal place to while away a happy day or two.

Here’s Just a Few of the Attractions at Orford 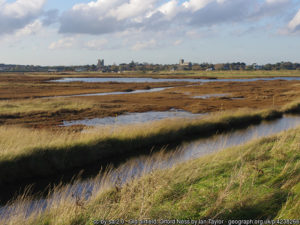 A ten mile long shingle spit, with marsh, lagoons and waterways. This was the haunt of smugglers in the 1800’s, and later became a Ministry of Defence Atomic Weapons Research Centre. Orford Ness has a long history of experimental work much of which is still top secret today. Britain’s first atomic weapon, Blue Danube, was developed and tested in the ‘pagodas’ which dominate the coastline. The skeletal remains of other buildings used during the two world wars and the Cold War are still scattered across the shingle. 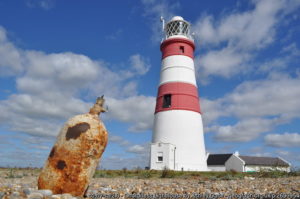 Orford Lighthouse is one of the most iconic buildings on the Suffolk coast; seen from miles around it has, for centuries, guided sailors safely along the shoreline. Reaching high into the Suffolk sky it is remote, unspoiled, and holds a magic that appeals to us all. 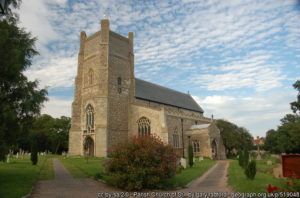 Grade I Listed St Bartholomews Church, built in the 14th century, with 12th century remains attached has been voted one of the best churches in the UK and has stunning acoustics, making any performances a must!

Souring over the town, with views over Orford Ness, and home to the village museum is the Castle. Built between 1165 and 1173 by Henry II to consolidate Royal power in the region, the well-preserved keep stands amongst the earth-covered works of the outer fortification.

If castles are your thing then read on for a lot more information about this important monument.

Discover one of England’s most complete and unusual keeps, at this fascinating visitor attraction in Suffolk. The unique polygonal tower keep of Orford Castle stands beside the pretty town and former port, which Henry II also developed here.

The castle is remarkably intact allowing visitors to explore from the basement, through the lower and upper halls to the roof where there are magnificent views seaward to Orford Ness. Around the rooms is a maze of passages leading to the chapel, kitchen and other chambers in the turrets. 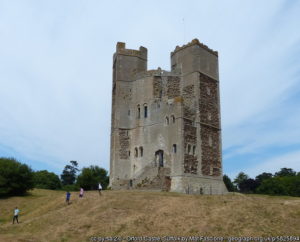 Orford Castle was built between 1165 and 1173 by Henry II to consolidate royal power in the region. The well-preserved keep, described by historian R. Allen Brown as “one of the most remarkable keeps in England”, is of a unique design and probably based on Byzantine architecture. The keep still stands among the earth-covered remains of the outer fortifications.

History from the 12th century

Prior to the building of Orford Castle, Suffolk was dominated by the Bigod family, who held the title of the Earl of Norfolk and owned key castles at Framlingham, Bungay, Walton and Thetford. Hugh Bigod had been one of a group of dissenting barons during the Anarchy in the reign of King Stephen, and Henry II wished to re-establish royal influence across the region. Henry confiscated the four castles from Hugh, but returned Framlingham and Bungay to him in 1165.

Henry then decided to build his own royal castle at Orford, near Framlingham, and construction work began in 1165, concluding in 1173.

The design of the keep was unique

The 90-foot-high central tower was circular in cross-section with three rectangular, clasping towers built out from the 49-foot-wide (15-metre) structure.

The tower was based on a precise set of proportions.  Much of the interior is built with high-quality ashlar stonework, with broad, 5-foot-6-inch-wide staircases. The best chambers were designed to catch the early morning sun, whilst the various parts of the keep were draught-proofed with doors and carefully designed windows.

Originally the roof of the keep, above the upper hall, would have formed a domed effect, with a tall steeple above that.

The keep was surrounded by a curtain wall with probably four flanking towers and a fortified gatehouse protecting a relatively small bailey; these outer defences, rather than the keep, probably represented the main defences of the castle.

Some of the timbers were brought from as far away as Scarborough, and the detailed stonework being carved from limestone from Caen in Normandy, the remainder of the stone being variously local mudstone and coralline, as well as limestone from Northamptonshire.

By the start of the 13th century, royal authority over Suffolk had been firmly established, after Henry II crushed the Bigods in the revolt of 1173–1174, Orford being heavily garrisoned during the conflict, with 20 knights being based there. 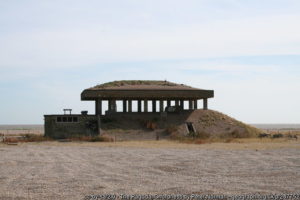 How the port of Orford came about

The marshes nearby were drained, turning the village of Orford into a sheltered port. The castle, including the surrounding ditch, palisade and stone bridge, cost £1,413 to build, the work possibly being conducted by the master mason Alnoth.

Upon the collapse of the rebellion, Henry ordered the permanent confiscation of Framlingham Castle. The political importance of Orford Castle diminished after Henry’s death in 1189, although the port of Orford grew in importance, however, handling more trade than the more famous port of Ipswich by the beginning of the century.

The castle was captured by Prince Louis of France who invaded England in 1216 at the invitation of the English barons who were disillusioned with King John.

John Fitz-Robert became the governor of the royal castle under the young Henry III, followed by Hubert de Burgh.

Under Edward I governorship of the castle was given to the de Valoines family, and it passed by marriage to Robert de Ufford, the 1st Earl of Suffolk, who was granted it in perpetuity by Edward III in 1336

No longer a royal castle, Orford was passed on through the Willoughby, Stanhope and Devereux families, whilst the surrounding economy of Orford went into decline.

The estuary of the River Ore silted up and the Orford Ness spit increased, making the harbour access more difficult, resulting in a decline in trade, reducing the importance of the castle as the centre of local government.

The castle and surrounding lands were bought by the Seymour-Conway family in 1754.

By the late 18th century only the north wall of the bailey survived and the roof and upper floors of the keep had badly decayed, and Francis Seymour-Conway, the 2nd Marquess of Hertford, proposed destroying the building in 1805. 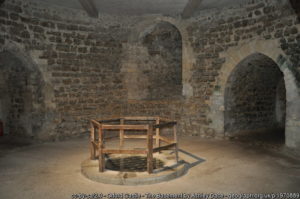 He was prevented from doing so by the government, on the grounds that the keep formed a valuable landmark for ships approaching from Holland, wishing to avoid the nearby sandbanks.

Francis furnished the top of the keep for use as an apartment by guests. By the 1840s, however, all of the surrounding bailey wall and mural towers had almost vanished, having been quarried for stone, and the foundations could only just be seen.

Yet another change of Ownership

Sir Arthur Churchman bought Orford Castle in 1928 and gave the property to the Orford Town Trust; an appeal for money to maintain and restore it began shortly afterwards. In 1930 the castle opened to the public.

During the Second World War the castle was refortified with barbed wire to form what was originally intended to be an anti-aircraft emplacement, with Nissen huts erected around the keep. It was used as a radar station. These buildings were removed at the end of the conflict. 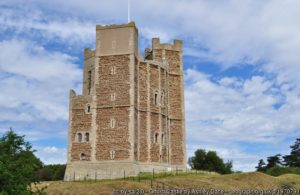 Orford Castle is now maintained by English Heritage. The keep of the castle is the only part of the structure remaining intact, although the earthwork remains of the bailey wall are still visible. Some of the ditches visible amongst the earthworks are not medieval but results of later quarrying of the bailey walls.

The Orford Museum Trust has created exhibits in the upper hall featuring displays of archaeological artefacts found locally. Archaeological work to interpret the surrounding environment has continued. The castle is a scheduled monument and a Grade I listed building.

Wild Man of Orford – the legend lives on

Orford Castle is associated with the legend of the Wild Man of Orford. According to the chronicler Ralph of Coggeshall, a naked wild man, covered in hair, was caught in the nets of local fishermen around 1167. The man was brought back to the castle where he was held for six months, being questioned or tortured. He said nothing and behaved in a feral fashion throughout.

The wild man finally escaped from the castle. Later accounts described him as a merman, and the incident appears to have encouraged the growth in “wild men” carvings on local baptismal fonts—around twenty such fonts from the later medieval period exist in coastal areas of Suffolk and Norfolk, near Orford.