Beautiful Cornwall, Scenery To Enjoy All Year Round!

Cornwall offers the traveller so much more

-with its granite-fanged coast breaking the North Atlantic rollers, pointing the way to an ancient land of mystery and legend, wild terrain and exotic gardens. 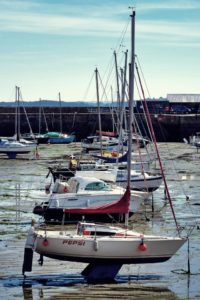 Land’s End – England’s most westerly point – and the most southerly point, the awesome Lizard Peninsula. On the way, Penzance and the iconic St Michael’s Mount – England’s answer to Brittany’s Mont-St-Michel.

The actual Land’s End or Peal Point, is a modest headland compared with nearby headlands

The present hotel and tourist complex is at Carn Kez, south of the actual Land’s End.

Land’s End is often used to suggest distance- Why is That? 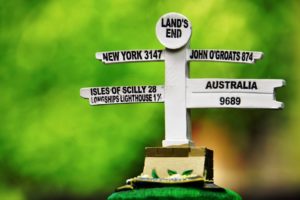 The Longships, a group of rocky islets are just over 1 mile offshore, and together with the Reef and the Isles of Scillye Seven Stones  which lie about 28 miles  southwest — are part of the mythical lost land of Lyonesse, referred to in Arthurian literature.

The area around Land’s End has been designated part of an Important Plant Area, for rare species of flora

It’s Been a Tourist Trap for centuries!

Tourists have been visiting Land’s End for over three hundred years.

In 1649, an early visitor was the poet John Taylor.

At Carn Kez, the First and Last Inn owned a small house which looked after the horses while visitors roamed the cliffs. The house at Carn Kez was then developed into the present hotel.

The earliest part of the house was damaged by the Luftwaffe when a plane returning from a raid on Cardiff jettisoned its remaining bombs. 53 fisherman were injured or killed. In the build-up to D-Day American troops were billeted in the hotel leaving the building in a bad state. 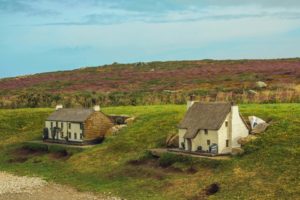 He had two new buildings erected and much of the present theme park development was instigated by him.

He sold both Land’s End and John o’ Groats to businessman Graham Ferguson Lacey in 1991.

Attractions at the theme park include children’s playgrounds and recorded music. Twice a week in August, Land’s End hosts ‘Magic in the Skies’, a night-time firework spectacular with music

Interesting fact – Do You Remember ?

In May 2012, Land’s End received worldwide publicity as the starting point of the 2012 Summer Olympics torch relay.