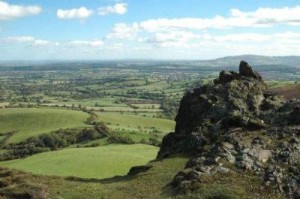 Up the River Severn into Shropshire and the Ironbridge Gorge – a World Heritage Site. The ten museums and the Iron Bridge preserve the history of the birthplace of the Industrial Revolution.

On up the river to the county town, Shrewsbury. A red sandstone castle guards the entrance to this medieval gem. Walk Fish Street. Then there’s Ludlow, another architectural treasure house, with its castle dominating the area. Nearby Stokesay Castle is a classic fortified 13th century manor house, with a fine moated garden.

Among Shropshire’s great houses and gardens is Hodnet Hall with its unusual water gardens. Visit also Mawley Hall and its modern gardens, and Morville Hall, telling the story of English gardening.

Let’s take to the hills. The Wrekin, with its stunning views across 15 counties is topped by a hill fort. It was the setting for Middle Earth in Tolkien’s ‘The Lord of the Rings’. The Long Mynd – or ‘Long Mountain’ – has ancient tracks running its nine miles, and Wenlock Edge has more wonderful walks and breathtaking vistas.

One of Shropshire’s famous ‘black and white’ towns became the birthplace of the modern Olympic movement after a local doctor founded the Much Wenlock Olympian Society, which inspired the global event.

Another of Shropshire’s claims to fame: Market Drayton is known as the home of gingerbread.

Find a Bed and Breakfast in Shropshire

2 Reviews of Bed and Breakfast Shropshire: Finding a Shropshire B&B