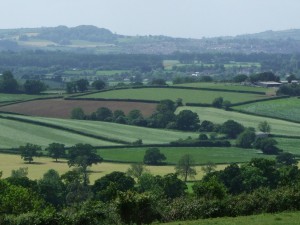 Let’s start with a walk on Exmoor, sharing it with the wild ponies, red deer and buzzards. The medieval village of Dunster lies on its eastern edge, dominated by its Norman castle and wooded slopes. At Oare, relive the classic Exmoor romantic novel ‘Lorna Doone’. Arthurian legend shrouds Glastonbury. King Arthur’s body is said to lie in the ruins of the abbey and Glastonbury Tor is supposed to be the mythical Avalon.

To Wells, and perhaps the most beautiful of England’s cathedrals. Its stunning West Front features 300 statues of medieval kings, knights and saints. More amazing Somerset architecture – at Bath. Stroll the Georgian gems Royal Crescent and The Circus, take tea at the Pump Rooms and take to the waters at the Roman Baths.

Some Somerset superlatives – at Cheddar. Its gorge is Britain’s largest; the Chedda Yeo, in Gough’s Cave, is its biggest underground river and the 9,000-year-old ‘Cheddar Man’ is its oldest complete skeleton. And the eponymous cheese is claimed to be the best!

Bristol has much to offer. Brunel’s amazing steamship ‘Great Britain’ lies in dry dock beneath the engineer’s Clifton Suspension Bridge.

Somerset’s popular gardens include the walled grounds of Cannington, Tintinhull and its 17th century house and Hestercombe, spanning three centuries. And don’t forget, Somerset is where the cider apples grow!

Find a Bed and Breakfast in Somerset