Bude – One of the Jewels of The Cornwall “Holiday” Coast.

Home » Bed & Breakfast News » Bed and Breakfast Blog » Bude – One of the Jewels of The Cornwall “Holiday” Coast.

has fantastic family-friendly beaches. And there are more, along with surf, around Newquay and Padstow. Fine beaches also surround St Ives, which attracts traditional holidaymakers and artists.

Bude’s  earlier importance was as a harbour, and then a source of sea sand useful for improving the moorland soil. The Victorians favoured it as a watering place, and it was a popular seaside destination in the 20th century.

Did You Know the Sand was Used as a Fertilizer!

As the sands and cliffs around Bude contain calcium carbonate (a natural fertiliser), farmers used to take sand from the beach, for spreading on their fields. The cliffs around Bude are the only ones in Cornwall that are made of Carboniferous sandstone, as most of the Cornish coast is formed of Devonian slate, granite and Precambrian metamorphic rocks.

The stratified cliffs of Bude give their name to a sequence of rocks called the Bude Formation. Many formations can be viewed from the South West Coast Path which passes through the town.

Many ships have been wrecked on the jagged reefs which fringe the base of the cliffs. The figurehead of one of these, the Bencoolen, a barque whose wrecking in 1862 resulted in the drowning of most of the crew, was preserved in the churchyard but was transferred to the town museum to save it from further decay

If You Love The Cornish Coast Visit Bude & Newquay This year

Present-day Bude has two beaches with broad sands close to the town, and is a good centre for adjacent beaches. Its sea front faces west and the Atlantic rollers make for good surfing when conditions are right.

Bude’s Place as a Victorian resort

In the latter part of Queen Victoria’s reign, the middle classes were discovering the attractions of sea bathing, and the romantic movement encouraged an appreciation of wild scenery

The railway line was extended to Bude in 1898. This encouraged the holiday trade, but Bude never really rivalled Newquay or some of the resorts in south Cornwall and Devon

Did You Know Budehad a Canal?

A  wharf on the Bude Canal about half a mile from the sea lock that links the canal to the tidal haven can be opened only at or near high tide, and then only when sea conditions allow.

These gates were renewed after the originals were damaged in a storm in 2008. They are the only manually operated sea lock gates in England. The pier head by the locks is a Grade II listed structure.

The canal is one of the few of note in south-west England. Its original purpose was to take 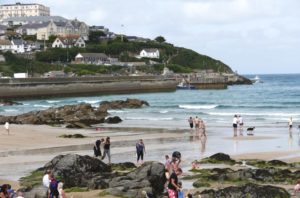 small tub boats of mineral-rich sand from the beaches at Bude and carry them inland for agricultural use on fields.

A series of inclined planes carried the boats over 400 vertical feet  to Red Post, where the canal branched south along the upper Tamar Valley towards Launceston, east to Holsworthy and north to the Tamar Lakes, that fed the canal.

The enterprise was always in financial difficulty, but it carried considerable volumes of sand and also coal from south Wales. The arrival of the railway at Holsworthy and the production of cheap manufactured fertilizer undermined the canal’s commercial purpose, and it was closed down and sold off.

However the wharf area and harbour enjoyed longer success, and coastal sailing ships carried grain across to Wales and coal back to Cornwall.

Looking for that perfect B&B in Bude or closeby? click here now