2019 marks a special anniversary. It is 70 years since the 1949 National Parks and Access to the Countryside Act was passed under Clement Attlee’s post-war government, laying the foundation for our great National Parks, the beautiful and protected areas of the countryside that we know and love today. The UK boasts 15 National Parks, 10 in England, 3 in Wales and 2 in Scotland. We hope the National Parks we have highlighted here will inspire you to explore the great outdoors.

Lake District
‘The loveliest spot that man hath found’ – William Wordsworth
The inspiration of writers and artists alike, it comes as no surprise that this UNESCO World Heritage Site is the UK’s most popular National Park, encompassing England’s highest mountain, Scafell Pike, as well as deep valleys, lakes, ancient woodland and idyllic villages.
It’s a great park for mountain-biking with many routes for all abilities as well as walking and watersports or if you prefer a more restful route with breath-taking views, travel on the Ravenglass and Eskdale Railway.

Cairngorms
In the heart of the Scottish Highlands, the UK’s largest National Park offers a diverse landscape, from mountain ranges to deep valleys, woodland, lochs and rivers. There’s a great variety of activities for visitors including boating, gorge-walking, cycling and many miles of local pathways for the enjoyment of walkers.  Home to amazing wildlife such as the red squirrel, pine marten and golden eagle, it was the focus for this year’s BBC Springwatch, which many of you may have followed. 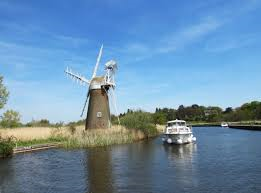 Norfolk Broads
Offering something totally different, The Broads with over 125 milesof navigable waterways, woodlands and fens, is home to some of the UK’s rarest animals and plants. There’s a wealth of historical heritage to explore from ancient monuments to castles and museums as well as windmills dotted on the landscape. There’s plenty to do including angling, kayaking, cycling, walking and horse-riding.

New Forest
Discover open heathlands, beautiful coastline and ancient woodlands, the timeline of which dates back to William the Conqueror when he established the area as a hunting ground for deer and wild boar. The New Forest obtained its name when trees were planted to replace those removed to build Henry VIII’s navy.

Take a ride on the open top New Forest Tour as it travels through stunning scenery via picturesque villages and popular attractions such as the National Motor Museum at Beaulieu. Other activities include walking, cycling, horse-riding, canoeing, kayaking and archery.

Pembrokeshire Coast
The only predominantly coastal National Park in the UK, it incorporates the spectacular Pembrokeshire Coast National Trail traversing 200 miles from St Dogmaels, south to Amroth.The park is a great haven for wildlife including puffins and Manx shearwaters returning each year to the islands of Caldey, Grassholm, Skokholm, Skomer and Ramsey to nest.

Why not visit one of Britain’s other National Parks?

See Exmoor with its rocky headlands, caves and waterfalls as well as 430 sq. miles of hilly, heather clad moorland and tree-lined valleys.

Snowdonia with its 830 sq. miles of rugged mountain peaks and steep river valleys?

And the more recently designated South Downs with its glorious rolling hills and woodlands.