County Durham & The North – Really Does Have So Much To Offer the Visitor!

Home » Bed & Breakfast News » Bed and Breakfast Blog » County Durham & The North – Really Does Have So Much To Offer the Visitor!

COUNTY DURHAM – the ecclesiastical and academic wonderland of Durham with its magnificent cathedral and Norman fortress; Barnard Castle and its amazing French-style chateau housing the Bowes Museum, see more later ……. 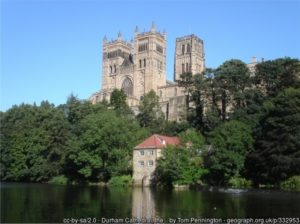 The Cathedral Church of Christ, Blessed Mary the Virgin and St Cuthbert of Durham, commonly known as Durham Cathedral and home of the Shrine of St Cuthbert.

It is the seat of the Bishop of Durham, the fourth-ranked bishop in the Church of England hierarchy. The present cathedral was begun in 1093, replacing the Saxon ‘White Church’, and is regarded as one of the finest examples of Norman architecture in Europe

In 1986 the cathedral and Durham Castle were designated a UNESCO World Heritage Site.

Durham Cathedral holds the relics of Saint Cuthbert, transported to Durham by Lindisfarne monks in the ninth century, the head of Saint Oswald of Northumbria, and the remains of the Venerable Bede. 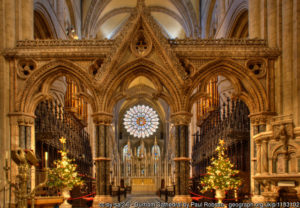 In addition, its library contains one of the most complete sets of early printed books in England, the pre-Dissolution monastic accounts, and three copies of Magna Carta.

From 1080 until 1836 the Bishop of Durham held the powers of an Earl Palatine, exercising military and civil leadership as well as religious leadership, in order to protect the English Border with Scotland.

How well do you know your Harry Potter?

Durham Cathedral featured in the first two Harry Potter films (Philosopher’s Stone and Chamber of Secrets) as Hogwarts School of Witchcraft and Wizardry.

The Cloisters appeared in a number of scenes as one of the school’s courtyards , the Chapter House as Professor McGonagall’s classroom, and the Triforium upper-levels as the Forbidden Corridor.

The exterior architecture of the Cathedral also heavily inspired the design of the Hogwarts model used in the films, and a section of the model is noticeably styled off the Cathedral, with the addition of fantastical spires 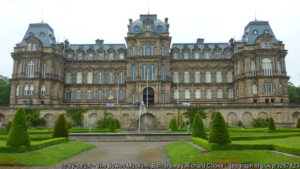 This nationally renowned art collection  is situated in the town of Barnard Castle.

The early works of French glassmaker Émile Gallé were commissioned by Joséphine, wife of the founder John Bowes. 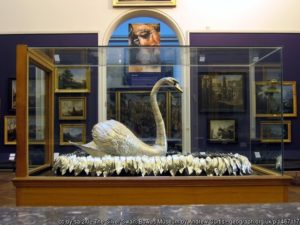 A great attraction is the 18th-century Silver Swan automaton, which periodically preens itself, looks round and appears to catch and swallow a fish.

The Bowes Museum was purpose-built as a public art gallery for John Bowes and his wife Joséphine Chevalier, Countess of Montalbo, who both died before it opened in 1892.

Then onto Newcastle upon Tyne – its bridges, including the Tyne and Gateshead Millennium, The Sage Gateshead, The Baltic, St Nicholas Cathedral and The Castle; step back into the 17th and 18th centuries at Beamish Open Air Museum, the first permanent working railway – the Stockton and Darlington; the Pennine Way with the River Tees dropping spectacularly at High Force.

on the northern bank of the River Tyne,  its the most populated city in the North East. 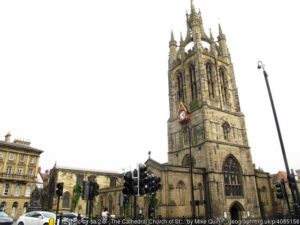 Newcastle was part of the county of Northumberland until 1400, when it became a county on its own, a status it retained until becoming part of Tyne and Wear in 1974.

As we all know The regional nickname and dialect for people from Newcastle and the surrounding area is Geordie.

The city developed around a Roman settlement  and was named after the castle built in 1080 by Robert Curthose, William the Conqueror’s eldest son.

The city grew as an important centre for the wool trade in the 14th century, and later became a major coal mining area.

The port developed in the 16th century and, along with the shipyards lower down the River Tyne, was amongst the world’s largest shipbuilding and ship-repairing centres.

The Cathedral Church of St Nicholas

It is the seat of the Bishop of Newcastle and is the mother church of the Diocese of Newcastle, the most northerly diocese of the Anglican Church in England, which reaches from the River Tyne as far north as Berwick-upon-Tweed and as far west as Alston in Cumbria.

Founded in 1091 during the same period as the nearby castle, the Norman church was destroyed by fire in 1216 and the current building was completed in 1350, so is mostly of the Perpendicular style of the 14th century. Its tower is noted for its 15th-century lantern spire. Heavily restored in 1777, the building was raised to cathedral status in 1882, when it became known as the Cathedral Church of St Nicholas. 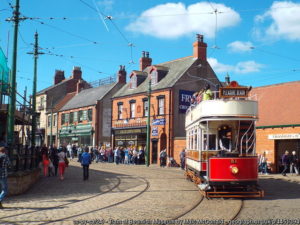 Beamish Museum is an open-air museum near the town of Stanley, its  guiding principle is to preserve an example of everyday life in urban and rural North East England at the climax of industrialisation in the early 20th century.

Much of the restoration and interpretation is specific to the late Victorian and Edwardian eras, together with portions of countryside under the influence of industrial revolution from 1825.

On its 300 acres  estate it uses a mixture of translocated, original and replica buildings, a large collection of artifacts, working vehicles and equipment, as well as livestock and costumed interpreters. 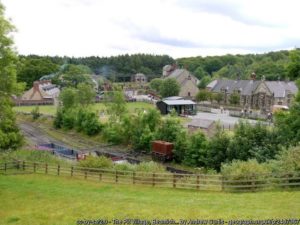 The museum has received a number of awards since it opened to visitors in 1972 and has been influential on other ‘living museums’. It is an educational resource, and also helps to preserve some traditional north-country and rare livestock breeds.

It really is worth devoting some time when visiting, there’s so much to see and do and its certainly not just a “trip down memory lane” its really so much more than that – visit soon.