Days Out in Devon – Sample a Traditional Steam Railway

it’s a great experience and enjoyed by many, especially over the summer season. There’s something really special travelling by steam. For me it’s I grew up with and the steam, the hiss, smell and clouds of smoke are nostalgic taking me back to my childhood. 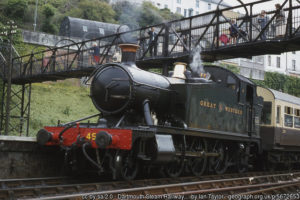 Whenever I go away and if there’s a steam railway I take time out to climb on board – it’s special. Here’s a little bit of detail on this particular one.

Much of the railway’s business is from summer tourists from the resorts of Torbay, who travel to Kingswear, where the Dartmouth Passenger Ferry takes them across the River Dart to Dartmouth.

The line is owned and operated by Dart Valley Railway 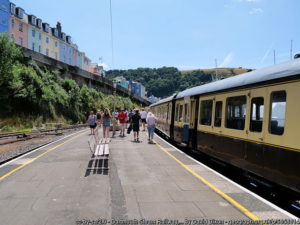 Unusually amongst heritage railways, it is a commercial operation which does not rely on volunteer labour or charitable donations, although a few volunteers help at Churston railway station. 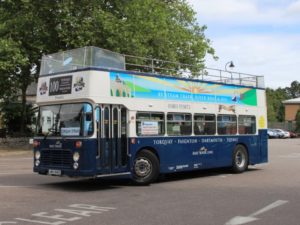 The steam railway also operates the No.100 bus service between Paignton, Goodrington Sands and Totnes, calling at Steamer Quay and the town centre.

Some of the buses are open-top and are used regularly in the Summer, offering a connection with the railway and boat services on the river Dart and out to sea. 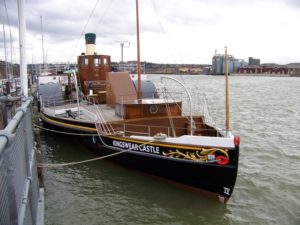 Here’s a real piece of history -. She is a coal-fired river paddle steamer, dating from 1924 with engines from 1904.

After running summer excursions on the River Medway and the Thames for many years she returned to the River Dart in Devon in December 2012 to run excursions from 2013 onwards on the river she was built on and for. 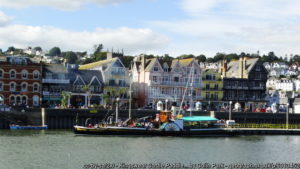 It was built by Philip & Sons of Dartmouth in 1924 for service on the River Dart, following sister ships Compton Castle and Totnes Castle, and was operated by the River Dart Steamboat Co.

Her predecessor of the same name from 1904 is now a rotted and barely recognisable hulk in the River Dart, but the engines were re-used in the current steamboat.

She was chartered to the United States Navy during World War II, and was used for carrying stores and personnel at Dartmouth.

In 1965 she was withdrawn from service and became the first purchase of the Paddle Steamer Preservation Society two years later.

After various difficulties and a great deal of restoration work she was finally brought into service again in 1985, and was operated by the Paddle Steamer Kingswear Castle Trust based at Chatham Historic Dockyard in Kent, in association with the PSPS.

On 18 December 2012 she returned to the River Dart again, under charter to the Dartmouth Steam Railway and Riverboat Company, to run passenger trips around Dartmouth Harbour and up river to Totnes.  Back where she bellows, doing what she was originally built for!

In the peak season, the NT1 bus service is operated between Churston station yard, Greenway Halt and the entrance to the drive of Greenway House in connection with the train service.

The railway runs steam trains every day of their main operating season which is normally between April and November with additional low season running in February, March, November and December.

Diesel haulage is provided only in emergencies when no steam locomotive is available due to failure, or as an addition to the published timetable on special occasions,

There are also Santa trains in December.

But this is just a taster of what Devon has to offer, check out our Days Out calander and find so much more.

And if you’re looking for great places to stay here’s just some of our B&Bs looking forward to welcoming you. CLICK HERE NOW