Devon & Dartmoor – A Heady Combination for the Visitor

Travelling through Devon, expect the unexpected. The scenery is stunning, the people welcoming and the beaches along the “English Riviera” have to be experienced to be believed – try it, you’ll be glad you did!

Lush pastures in a latticework of flower-decked lanes; stunning beaches set in a rugged coastline. All kept guard over by the lowering Dartmoor – bleak and isolated at its heart, with its ten tors standing defiantly against the elements, Devon’s national park is surrounded by thatched villages nestling in 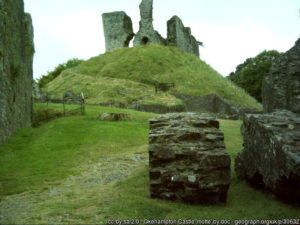 valleys alongside streams and waterfalls. Visit the Museum of Dartmoor Life, at Okehampton.

Dartmoor is known for its myths and legends. It is reputedly the haunt of pixies, a headless horseman, a mysterious pack of “spectral hounds”, and a large black dog, among others. 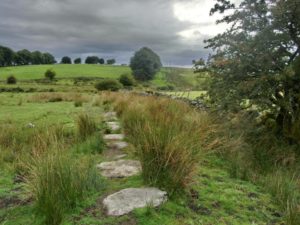 During the Great Thunderstorm of 1638, the moorland village of Widecombe-in-the-Moor was even said to have been visited by the Devil.

Many landmarks have ancient legends and ghost stories associated with them, such as the allegedly haunted Jay’s Grave, the ancient burial site of Childe’s Tomb, the rock pile called Bowerman’s Nose, and the stone crosses that mark former mediaeval routes across the moor. 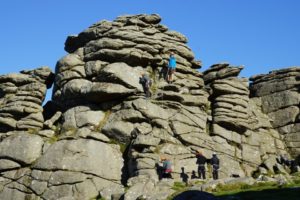 Dartmoor has inspired a number of artists and writers, such as Sir Arthur Conan Doyle in The Hound of the Baskervilles to name just one famous author.

Over half of Dartmoor National Park is private land; the Forest of Dartmoor being the major part of this, owned by the Duke of Cornwall. 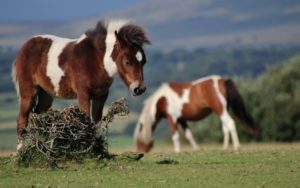 Wild Ponies on the Moor

Other owners are The Ministry of Defence , water companies  National Trust, Forestry Commission  by Dartmoor’s national park authority.Plus there’s a large area that is  common land

Dartmoor differs from some other National Parks in England and Wales, in that since the Dartmoor Commons Act 1985 much of it has been designated as ‘Access Land’, which, although it remains privately owned, has no restrictions on where walkers can roam.

Exeter is Devon’s vibrant county town, dominated by the twin towers of its gloriously ornate cathedral. Then southwest to the ‘English Riviera’ – Torquay, Paignton and Brixham – and their semi-tropical gardens and fine beaches. Paignton Zoo is world-renowned.

The city of Exeter is located on the River Exe it is the county town of Devon.

Exeter Cathedral, founded in the mid-11th century, became Anglican during the 16th-century English 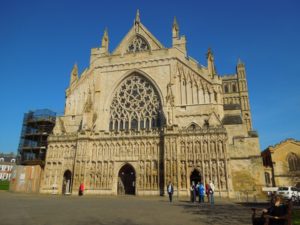 During the late 19th century, Exeter became an affluent centre for the wool trade, although by the First World War the city was in decline. After the Second World War, much of the city centre was rebuilt and is now considered to be a centre for tourism in Devon and Cornwall.

Here’s another example of one of our B&B’s waiting to welcome you to the beautiful County of Devon.

The History of the Area

Roman soldiers are known to have visited Torquay during the period when Britain was a part of the Roman Empire, leaving offerings at a curious rock formation in Kent’s Cavern, known as “The Face”.

Both Brixham and Paignton appear in the Domesday Book of 1086 and Paignton was given the status of a Borough having a market and fair in 1294 the first major building in Torquay was Torre Abbey, a Premonstratensian monastery founded in 1196

William Prince of Orange (afterwards King William III) landed in Brixham on 5 November 1688, during the Glorious Revolution, and issued his famous declaration “The Liberties of England and The Protestant Religion I Will Maintain”.

Torquay’s economy was, like Brixham’s, initially based on fishing and agriculture, but in the early 19th century it began to develop into a fashionable seaside resort, initially frequented by members of the Royal Navy during the Napoleonic Wars while the Royal Navy anchored in Tor Bay and later, as the town’s fame spread, by Victorian society.

If You Love Your Gardens then Devon is for You!

Devon is home to great gardens. Arlington Court, set in a wooded valley, Bicton Park and Rosemoor are just a few.

Back to the south coast, and after a drink in the art-deco wonderland of Burgh Island it’s on to Plymouth Hoe and the ghosts of the Pilgrim Fathers, Drake and Raleigh. The National Marine Aquarium is Britain’s biggest and Europe’s deepest. Nearby, Mount Edgcumbe Park is another of Devon’s garden gems.

Remember We’ve been Leading the Way in B&B Accommodation for over 33 years, we are here to help