There’s plenty more …… discover it in the Scottish regions ….

Scotland, explore a country of ………… 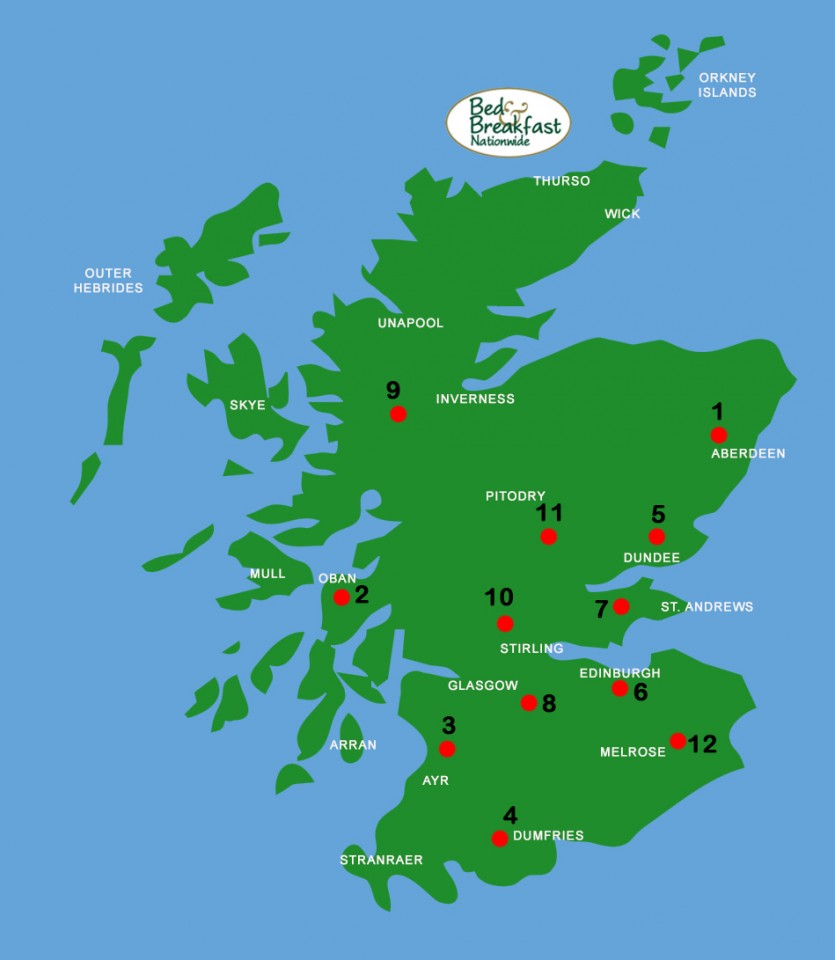 2.  Argyll and The Isles

6.  Edinburgh and The Lothians

8.  Glasgow, The Clyde Valley and Lanarkshire

9.  Highlands and Isle of Skye

10. Loch Lomond, Stirling and The Trossachs

Watched over by the Granite City itself, Aberdeen, the region slopes north from the Grampian Mountains to a magnificent coastline with the wild Rattray Head and secluded Charlestown beaches.

On from the mountains we’ve a land of heather moors, forests and rivers…and castles. Visit Balmoral, the Queen’s summer home, Braemar with its world famous Braemar Gathering, the 13th century Drum Castle, with its Jacobean mansion and the fairy tale Craigievar Castle.

See the dolphins and seals at the Scottish Dolphin Centre, admire the double cascade of Linn Falls, walk the wilderness of the Glenlivet Estate, watch the ospreys fishing at Findhorn Bay Reserve and the salmon leaping at the Falls of Feugh.

For the whisky drinker, twelve distilleries and the Speyside Whisky Festival. Cheers!

Find a B&B in Aberdeen, Grampian and Moray:

ARGYLL AND THE ISLES 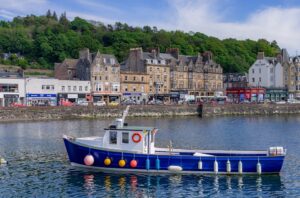 Let’s go west…Argyl and The Isles are everything that is Scotland. Prehistory at Kilmartin; the violent past at Inverary Castle, on Loch Fyne; history and beauty at Oban, with McCaig’s Tower, and Westport Beach, six miles of dunes and sands.

Don’t miss the beavers of Knapdale Forest. Catch a film at the art nouveau Campbeltown Picture House, then carry on south and sing along to Paul McCartney on his beloved Mull of Kintyre.

Find a B&B in Argyll and the Isles:

Ayreshire is Robert Burns, Scotland’s national bard. Follow the Poet’s Path through Alloway village to the museum and memorial gardens and Burns’ birthplace. On to Culzean Castle, with its gardens, beaches and woods, then further back in time to the 14th century Dundonald Castle.

Celebrate the Spirit of Scotland at Loudoun Hill and walk the classic Victorian ‘prom’ at Largs.

All aboard the ferry to Arran. First stop, Brodick Castle and its country park and, if you’re fit enough, Goatfell peak with views of the entire island. Admire Lochranza Castle and the Stone Age circles of Machrie Moor, and tie it all up at The Heritage Museum.

And don’t miss the Isle of Cumbrae, with its Cathedral of the Isles, Britain’s smallest cathedral.

Find a B&B in Ayrshire and Arran:

To the homeland of King of Scots, Robert Bruce. Here, in Glentrool, in what is now the Galloway Forest Park, Bruce won his first major victory over the English. 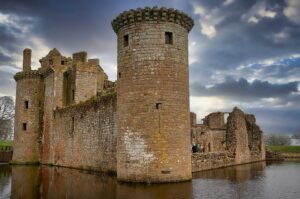 We’ll stay in the forest park – Britain’s largest – and wonder at the wildlife and navigate the stars at the Dark Sky Observatory. Follow the nature trails at the Mull of Galloway and the wild Cairnsmore of Fleet reserves. Fight off a siege at Caerlaverock Castle then relax in the bizarre and beautiful Logan Botanic Garden, on Scotland’s southwestern tip.

We mustn’t forget the national bard’s links to the region. The Robert Burns Centre, in Dumfries, bring his work to life. And finally, to the beaches of Brighouse Bay, Auchencairn and Southerness…known locally as the Costa del Solway!

Find a B&B in Dumfries and Galloway:

Welcome to Scotland’s sunniest city…and one of design and discovery. The V&A Dundee is everything that is design, the RRS Discovery takes you to Antarctica with Captain Scott, and the McManus gallery and museum takes you through 400 million years. 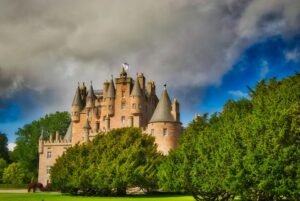 Into Angus and its stunning countryside including Glen Cova, Glen Lethnot and Glen Prosen, then onto Glamis Castle, childhood home of the Queen Mother. Board the Caledonian Railway from Brechin to Bridge of Dun, and dream along with Peter Pan and Wendy at JM Barrie’s birthplace, at Kirriemuir.

Watch the wildlife at Montrose Basin and walk in the surf and dunes of the three miles of Lunan Bay. Just time to look in on Arbroath Harbour and enjoy its amazing coast views…and a piping hot Smokie.

Find a B&B in Dundee and Angus:

EDINBURGH AND THE LOTHIANS

Let’s walk Edinburgh’s Royal Mile. At one end, dominating the skyline, Edinburgh Castle with Scotland’s crown jewels and the Stone of Destiny. At the other, Holyrood Palace, the official Scottish residence of the British monarch.

Then into Princes Street Gardens and the Scott Monument. Fine views…after 287 steps. More panoramas from Calton Hill and the slopes of Arthur’s Seat. Stroll the medieval Old Town and neoclassical New Town before boarding the Royal Yacht Britannia.

To the lush countryside of the Lothians, where the loch side ruins of Linlithgow Palace are a foil to Scotland’s finest stately home, Hopetoun House, and the 15th century Rosslyn Chapel.

The three bridges across the Firth of Forth are an amazing sight. See them from the water then learn their stories at the Queensferry Museum. And don’t miss the hi-tech wildlife spectacular at the Scottish Seabird Centre.

Find a B&B in Edinburg and The Lothians: 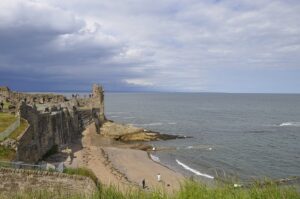 Fore! We’re off to St Andrews – the Home of Golf – and the Kingdom of Fife. Follow golfing legends on a guided walk of the Old Course and visit the British Golf Museum. Climb the tower of the ruined St Andrews Cathedral, tour the dungeons of the castle then relax on the famous beaches.

Out into Fife. The Fife Coastal Path and the Fife Pilgrim Way take you to fishing villages such as  St Monans and Pittenweem and historic landmarks at Markinch and Kinglassie. Mary, Queen of Scots, adored Falkland Palace and its gardens – so will you. On to the village of Culross, a living museum of 17th century port life, with its abbey and palace.

Watch for seals, eagles and squirrels at the Tentsmuir nature reserve then it’s all aboard the ferry to the puffins of the Isle of May, out in the Firth of Forth.

Find a B&B in Fife and St Andrews:

GLASGOW, THE CLYDE VALLEY AND LANARKSHIRE 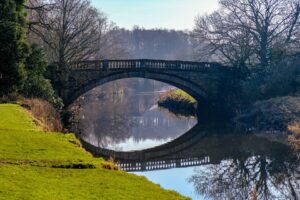 ‘The Dear Green City’ beckons. With its ninety parks and gardens, Glasgow more than lives up to the translation of its ancient name.  Stroll the Victorian Rouken Glen, the Glasgow Botanic Gardens and the 15th century Glasgow Green, home to the renowned People’s Palace.

On to the amazing Kelvingrove Art Gallery and Museum;  board the tall ship at the Riverside Museum; marvel at the city’s medieval cathedral and its mesmerising Necropolis, then follow the City Centre Mural Trail, mirroring the city’s stunning architecture.

Next stop, Paisley and its 1000 years of history and home to the Paisley Pattern. Then Greenock, merging great history and industry, and the Greenock Cut walk with its stunning views of the River Clyde.

Find a B&B in Glasgow, The Clyde Valley and Lanarkshire:

HIGHLANDS AND ISLE OF SKYE 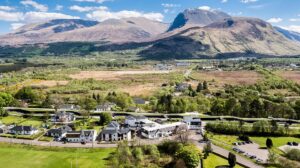 The Highlands. Where do we start? On the summit of Ben Nevis, the UK’s highest mountain, overlooking Fort William. From here explore the western wilds of Ardnamurchan and the forbidding beauty of Glencoe. Stroll parts of the Great Glen Way, linking Fort William to Inverness, taking in Loch Ness – and a possible glimpse of Nessie!

To Moray Speyside, drenched in heritage; Caithness and Sutherland, the last true wild lands in Britain, with John O’Groats 874 miles from Land’s End; sumptuous Cawdor Castle, and Inverness and the tragic story of Culloden battlefield.

Over the sea to Skye and its majestic Old Mann of Storr and the Cuillin. Dunvegan Castle, its gardens and loch tours are legendary, as are the island’s eagles, red deer, otters, dolphins, puffins…and whisky.

Find a B&B in the Highlands and Isle of Skye:

LOCH LOMOND, STIRLING AND THE TROSSACHS

Discover why this region is known as the home of Scottish tourism. Take in the spectacular landscapes of Loch Lomond on a boat trip before setting off into the glens, rivers and waterfalls of The Trossachs National Park. Join the kings and queens of Scotland at the stunning Stirling Castle and relive the Scots’ fight for freedom at the Battle of Bannockburn Experience and the National Wallace Monument. Go oriental in the Japanese gardens at Dollar, then go Roman, at Falkirk, at the Antonine Wall – the northernmost frontier of Roman Britain. 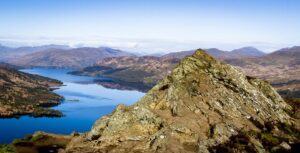 After a stroll along the Forth and Clyde and Union Canals, marvel at the Kelpies, the world’s largest horse sculptures, and another world-beater – the rotating boat lift.

Finally, to the ancient capital of Scotland and Dumbarton Castle, overlooking the Clyde…after you’ve climbed 500 steps.

Find a B&B in Loch Lomond, Stirling and The Trossachs:

We start at the roundhouse at Scottish Crannog Centre, on Loch Tay, and relive the Iron Age. Then Bair Atholl and its spectacular Blair Castle, gatekeeper to The Highlands for 700 years. On to delightful Aberfeldy, on the River Tay, and the colourful ‘little houses’ of Dunkeld, in the shadow of its ruined cathedral.

Onwards and upwards from Pitlochry’s world-renowned dam and fish ladder, to Queen’s View, one of Scotland’s most iconic panoramas overlooking Loch Tummel. To Scone Palace, crowning place of Scottish kings, and Drummond Castle Garden, one of Europe’s most impressive formal gardens.

Perthshire is known as Big Tree Country.  Learn why in its 200,000 acres of woodland.

Find a B&B in Perthshire:

A land of inspiration. Sir Walter Scott and John Buchan were moved to great works by the magic of The Borders. Join them on The Borders Abbey Way – the hauntingly beautiful ruins of Kelso, Jedburgh, Melrose and Dryburgh abbeys. 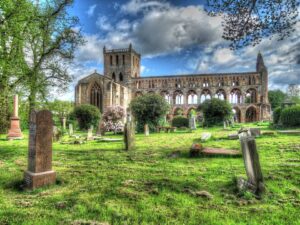 The Berwickshire Coastal Path takes you back 440 million years and into the world renowned St Abb’s Head national nature reserve. Relive the tragic life of Mary, Queen of Scots in the Jedburgh towerhouse. Imagine the high life at the magnificent Floors Castle and Mellerstain House but watch out for the jousting knights at Traquair.

Be moved by Sir Walter Scott’s beloved Abbotsford, then it’s into the Tweed Valley Forest Park – seven forests with their own special wildlife, history, views…and peace.

Find a B&B in the Scottish Borders: