Discover the Eden Project Story – it’s absolutely fascinating – a real Feat of Engineering & so Much more!!

This is really an absolutely stunning project that you simply must visit at some point – it’s absolutely unique and is nestled in a huge crater. Here, massive Biomes housing the largest rainforest in captivity, stunning plants, exhibitions and stories serve as a backdrop to the striking contemporary gardens, and are home to summer concerts and exciting year-round family events

The Eden Project, an educational charity, and its mantra is to connect us with each other and the living world, exploring how we can work towards a better future.

The project was conceived by Tim Smit and designed by architect Nicholas Grimshaw and engineering firm Anthony Hunt and Associates the project took 2½ years to construct and opened to the public on 17 March 2001.

Inside the two biomes are plants that are collected from many diverse climates and environments. The project is located in a reclaimed china clay pit, located near the town of St Blazey and not fare from the larger town of St Austell.

The complex is dominated by two huge enclosures consisting of adjoining domes that house thousands of plant species, and each enclosure emulates a natural biome. The biomes consist of hundreds of hexagonal and pentagonal, inflated, plastic cells supported by steel frames. The largest of the two biomes simulates a rainforest environment and the second, a Mediterranean environment. The attraction also has an outside botanical garden which is home to many plants and wildlife native to Cornwall and the UK in general; it also has many plants that provide an important and interesting backstory, for example, those with a prehistoric heritage.

There are plans to build an Eden Project North in the seaside town of Morecambe, Lancashire, with a focus on the marine environment. 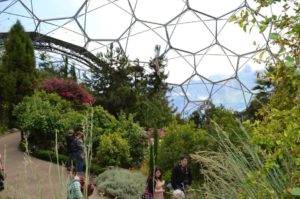 The Idea & How it came about

The initial idea for the project dates back to 1996, with construction beginning in 1998. The work was hampered by torrential rain in the first few months of the project, and parts of the pit flooded as it sits 15 m  below the water table.[

The first part of the Eden Project, the visitor centre, opened to the public in May 2000. The first plants began arriving in September of that year, and the full site opened on 17 March 2001.

The clay pit in which the project is sited was in use for over 160 years.

In 1981, the pit was used by the BBC as the planet surface of Magrathea in the 1981 TV series of the Hitchhiker’s Guide to the Galaxy. By the mid-1990s the pit was all but exhausted. 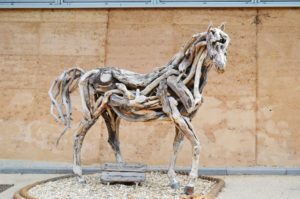 The Eden Project was used as a filming location for the 2002 James Bond film, Die Another Day.

Back in July 2005 The Eden Project hosted the “Africa Calling” concert of the Live 8 concert series. It has also provided some plants for the British Museum’s Africa garden.

In 2005, the Project launched “A Time of Gifts” for the winter months, November to February. This features an ice rink covering the lake, with a small café/bar attached, as well as a Christmas market. Cornish choirs regularly perform in the biomes.

The World Pasty Championships have been held at the Eden Project since 2012, an international competition to find the best Cornish pasties and other pasty-type savoury snacks

The Eden Project is said to have contributed over £1 billion to the Cornish economy. In 2016, Eden became home to Europe’s only Redwood forest when forty saplings of coast redwoods, which could live for 4,000 years and reach 115 metres in height, were planted here. 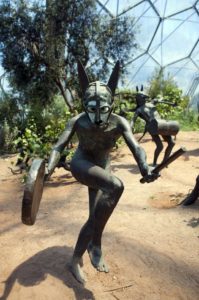