Following our recent Blog on Fountains, it sparked our own Sue Opperman to reminisce about the fun she had, which also involved introducing some of our grand country houses with her own children growing up, by visiting Mazes on her travels. While thinking of places to visit and things to do during the summer holidays, we thought it would be a good opportunity to look at some of the enchanting mazes around the country.

Hampton Court Palace Maze, Surrey – Probably one of the most famous, the maze at Hampton Court, commissioned by William III in the late 17th century, is the UK’s oldest surviving hedge maze. In those days it would have been built of 18 ft high hornbeam hedges, but was later replanted with yew. There is reportedly an average completion time of 20 minutes, but be warned…do not let this lull you into an air of security!

The Peace Maze, County Down, Northern Ireland – Located in Castlewellan Forest Park, the Peace Maze has become one of Northern Ireland’s fastest growing tourist attractions. The maze spanning 3 acres has an amazing 2.18 miles of pathway (there are 6000 yew trees!). There’s a bell to ring if you make it to the centre!

The Longleat Hedge Maze, Wiltshire – Situated less than an hours drive from Bath, this impressive hedge maze in the stunning grounds of Longleat was built in 1975. With two miles of intricate paths, to get to the central observation tower is no easy task!

The Forbidden Corner, Yorkshire – A unique opportunity to unleash the imagination in everyone, children and adults alike, The Forbidden Corner comprises of a fascinating labyrinth of tunnels, chambers and follies (not to mention a few surprises along the way!), created in a four acre garden. Built as the inspiration of Colin Armstrong OBE for his private enjoyment, due to popular demand it was opened to the general public in 1994. 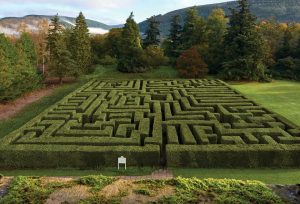 The Traquair Maze, Peeblesshire, Scotland – This maze is the largest hedged maze in Scotland and is located in the grounds of Traquair House, Scotland’s oldest inhabited house dating back to 1107. The maze has been designed with no dead ends and interestingly has been used in film and TV.

If you are looking for a summer break away, why not stay in one of our superb B&Bs, all personally inspected and selected for their warm welcome by a member of our team.

Map of our B&Bs

Our B&B guides by county

Our B&Bs that welcome children