The National Motorcycle Museum is recognised as the finest and largest British motorcycle museum in the world and originally opened its doors in October 1984 with a collection of 350 motorcycles on display. 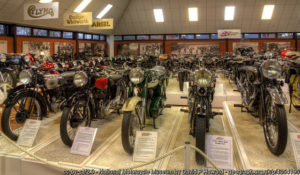 The Museum owes its formation to the drive and ambition of one man, Mr WR (Roy) Richards construction entrepreneur and self-made millionaire, his passion started by collecting good examples of British motorcycles in the 1970s. Roy passed away in 2008 but his work continues under the guardianship of Roy’s widow Christine & son’s Simon and Nick with The Museum collection now boasting some 1000 plus machines, fully restored to the manufacturers original specifications.

Since opening, this magnificent centre has become the largest motorcycle museum in the world and attracts around 250,000 visitors a year.

One of the biggest attractions for many guests is the comprehensive cross-section of British machines, spanning the “60 Glorious Year” of motorcycle manufacturing in this country.

The museum’s aim is to preserve these pieces of history for future generations to come, as a reminder of this great nations industry, engineering prowess and work ethic.

At some point over the past 30 years many of the UKs classic bike enthusiasts will have spent an afternoon browsing through the museums halls, and many clubs and organisations having held rallies and events in the grounds.

Occupying an 8-acre site in Bickenhill, Solihull, The award winning conference centre has 13 purpose built suites available, including the Wardroom, seating small parties of up to 20 guests, and the Imperial Suite which can host 1000.

The Museum also owns two local hotels, The Manor Hotel at Meriden (home of the old Triumph works) and The Windmill Village Hotel & Spa in Coventry. 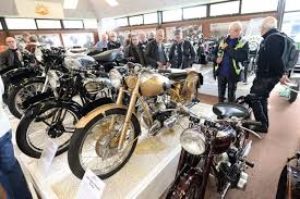 The museum was severely damaged by a fire which broke out shortly before 5pm on 16 September 2003. West Midlands Fire Service investigators concluded that a cigarette thrown away in a designated smoking area was responsible for igniting a pile of cardboard boxes containing old air-conditioning filters.

The fire spread very rapidly inside the museum’s dropped ceilings which, though conforming to safety regulations, did not contain a sprinkler system. Staff and people attending a conference helped to save more than 300 historic motorcycles but three of the five exhibition halls were completely burnt out. 120 firefighters were needed to put out the inferno which was visible for 15 miles. Many of the museum’s rarest and irreplaceable exhibits were destroyed, the loss of 380 motorcycles. The cost of the fire was estimated at over £14 million.

After fifteen months and a £20m rebuild which included installation of a £1.2m sprinkler system, the museum was reopened on 1 December 2004. 150 of the motorcycles that had been destroyed in the fire were fully restored for the re-opening. Many of the fire damaged motorcycles were restored to showroom condition. 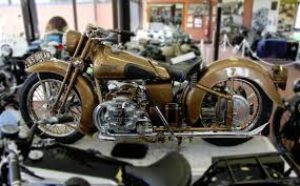 The museum is affiliated to the British Motorcycle Charitable Trust. The motorcycles on display represent examples of well-known makes, such as BSA, Triumph and Norton as well as less well known makers including Coventry-Eagle, Montgomery and New Imperial.

Here’s 2 really Unique Ones that you simply “must see” when you visit:

One of the most valuable motorcycles in the world the Brough Superior Golden Dream, which is the only example of George Brough’s show model for the 1938 Olympia show.Handbuilt by Brough and Freddie Dixon, the Golden Dream has two pairs of horizontally opposed cylinders, one above the other, with two longitudinal crankshafts to give vibration free running.

The two crankshafts shafts are geared together, with one driving the rear wheel and the other driving the oil pump and magdyno. Two Brough Dream Fours were built but World War II stopped development. The second Brough Dream has a black and chrome finish and is in private ownership

Built by the Wilkinson Sword company before the First World War the first ‘Wilkinsons’ were aimed at military use. Optional accessories included a sidecar complete with Maxim machine gun, and a steering wheel instead of handlebars. The model displayed in the museum was built in 1912 and is the top-of-the-range four-cylinder water-cooled shaft drive version. Originally air-cooled, the Wilkinson TMC engine was water-cooled from 1911 and described as a ‘Luxury Touring Motor Cycle’.