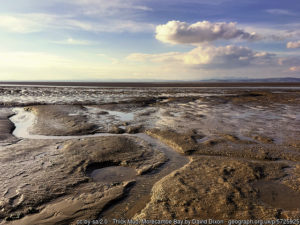 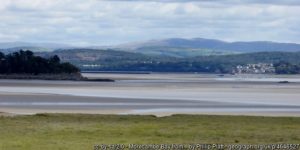 Want some ideas where to stay check this out now

Morecambe Bay is a large estuary in northwest England, just to the south of the Lake District National Park. It is the largest expanse of intertidal mudflats and sand in the United Kingdom,

In 1974, the second largest gas field in the UK was discovered 25 miles west of Blackpool, with original reserves of over 7 trillion cubic feet

At its peak, 15% of Britain’s gas supply came from the bay but production is now in decline.

The bay is notorious for its quicksand and fast moving tides. On the night of 5 February 2004, at least 21 Chinese immigrant cockle pickers drowned after being cut off by the tides

Around 320,000 people live along the coastline of Morecambe Bay, with the largest town being Barrow-in-Furness to the west. Morecambe was once a popular seaside holiday destination, whilst Barrow still relies on the seas for a large percentage of its economy in ship and submarine construction. 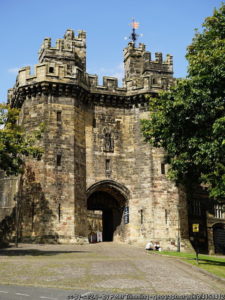 Lancaster Castle is a  great medieval castle with some amazing history

Its early history is unclear, but may have been founded in the 11th century on the site of a Roman fort overlooking a crossing of the River Lune.

In 1164, the Honour of Lancaster, including the castle, came under royal control. In 1322 and 1389 the Scots invaded England, progressing as far as Lancaster and damaging the castle. It then saw military action again during the English Civil War.

The castle was first used as a prison in 1196 although this aspect became more important during the English Civil War. The castle buildings are owned by the British sovereign as Duke of Lancaster, which leases part of the structure to Lancashire County Council who operate a Crown Court in part of the building.

Until 2011, the majority of the buildings were leased to the Ministry of Justice as Her Majesty’s Prison Lancaster. The Castle was returned to the Duchy’s ownership  in 2011. The Castle is now open to the public seven days a week and is undergoing a large-scale refurbishment to allow access to more areas.

Manchester metropolitan borough in Greater Manchester, It is fringed by the Cheshire Plain to the 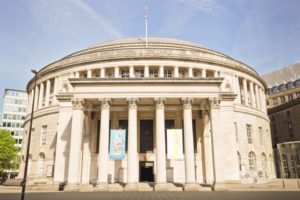 south, the Pennines to the north and east, and an arc of towns with which it forms a continuous conurbation.

The recorded history of Manchester began with the civilian settlement associated with the Roman fort of Mamucium or Mancunium, which was established in about AD 79 on a sandstone bluff near the confluence of the rivers Medlock and Irwell.

It is historically a part of Lancashire, although areas of Cheshire south of the River Mersey were incorporated in the 20th century. The first to be included, Wythenshawe, was added to the city in 1931.

Throughout the Middle Ages Manchester remained a manorial township, but began to expand “at an astonishing rate” around the turn of the 19th century. Manchester’s unplanned urbanisation was brought on by a boom in textile manufacture during the Industrial Revolution, and resulted in it becoming the world’s first industrialised city.

Manchester achieved city status in 1853. The Manchester Ship Canal opened in 1894, creating the Port of Manchester and directly linking the city to the Irish Sea, 36 miles) to the west. Its fortune declined after the Second World War, owing to deindustrialisation, but the IRA bombing in 1996 led to extensive investment and regeneration.

Manchester is the third-most visited city in the UK, after London and Edinburgh. It is notable for its architecture, culture, musical exports, media links, scientific and engineering output, social impact, sports clubs and transport connections. 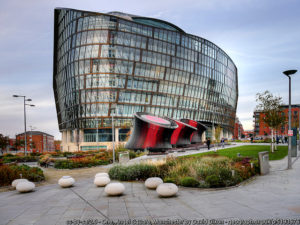 One Angel Square, is the Co-operative Society’s new headquarters in Manchester, completed in 2013.

The large structures in front of the building the three huge “earth tubes” that pull in the air for circulation around the building, functioning both as a sculpture and an environmentally-friendly heating and ventilation system for the entire vast structure. Since the completion of the installation the lighting has been programmed with a series of vibrant animations, such as these images of poppies to mark Remembrance Day 2016. 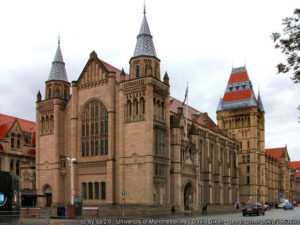 A city of notable firsts, it was at The University of Manchester that scientist Ernest Rutherford first split the atom, developed the stored-program computer and produced the first graphene. Manchester hosted the 2002 Commonwealth Games.