Northamptonshire – One Claim to Fame – The Oldest Leisure Park In England 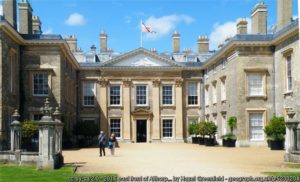 Althorp is a Grade I listed stately home and estate It has been held by the Spencer family for more than 500 years, and has been owned by Charles Spencer, 9th Earl Spencer since 1992. It was also the home of Lady Diana Spencer (later Princess of Wales)

Althorp is mentioned as a small hamlet in the Domesday Book as “Olletorp”, and by 1377 it had become a village with a population of more than fifty people.

By 1505 there were no longer any tenants living there, and in 1508, John Spencer purchased Althorp estate with the funds generated from his family’s sheep-rearing business. 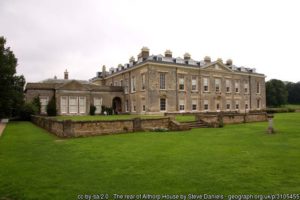 Althorp became one of the prominent stately homes in England. The mansion dates to 1688, replacing an earlier house that was once visited by Charles I. The Spencer family amassed an extensive art collection and other valuable household items. During the 18th century, the house became a major cultural hub in England, and parties were regularly held, attracting many prominent members of Great Britain’s ruling class.

George John, 2nd Earl Spencer, who owned Althorp between 1783 and his death in 1834, developed one of the largest private libraries in Europe at the house, which grew to over 100,000 books by the 1830s. After falling on hard times, John Spencer, 5th Earl Spencer, known as the Red Earl, in 1892 sold much of the collection to Enriqueta Rylands, who was building the University of Manchester Library.

Boughton House is a country house about 3 miles north-east of Kettering near Geddington in Northamptonshire,the estate of 11,000 acres, it is one of the seats of the Duke of Buccleuch, and famed for its beauty, its collections, and the fact it has survived virtually unchanged since the 17th 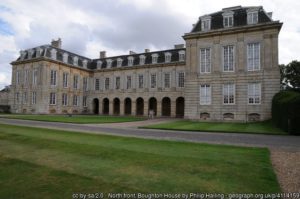 While possessing a medieval core, its exterior evokes an opulent French chateau, causing it to be termed The English Versailles

The magnificence of the collections at Boughton is explained by the ducal family surname Montagu-Douglas-Scott, which reflects the union of three great families and their estates through marriage: Montagu, the Dukes of Montagu; Douglas, the Dukes of Queensberry; and Scott, the Dukes of Buccleuch.

Boughton contains a comprehensive collection of furniture, tapestries, porcelain and carpets. The art collection includes many notable paintings such as The Adoration of the Shepherds by El Greco, Thomas Gainsborough’s portrait of Mary Montagu, and a celebrated series of grisailles by Van Dyck, and Breaking Cover by John Wootton.

Once a servants’ hall, located next to the kitchen, the armoury is now home to what many experts regard as one of the finest privately held armouries in the country. It is an historic collection that owes much to John, 2nd Duke of Montague.

Here’s some history  to it!

The original house was a monastic building but Sir Edward Montagu, Lord Chief Justice to King Henry VIII, purchased it in 1528 just prior to the Dissolution of the Monasteries and began to convert it into a mansion.

Most of the present building is the work of Ralph Montagu, 1st Duke of Montagu (d.1709) who inherited the house in 1683.

Ralph Montagu, 1st Duke of Montagu, was a patron of many Huguenot craftspeople. The Huguenot movement played an important role in his creation of The English Versailles.

Montagu was an English ambassador to France, and Boughton House shows strong French architectural influences. His son, John Montagu, 2nd Duke of Montagu, made little alteration to the house, but made sweeping changes to the landscape and gardens after his return from campaign in Europe with his father-in-law, John Churchill, 1st Duke of Marlborough.

Following the death of George, 3rd Duke of Montagu, in 1790, the house passed, through the marriage of his daughter, Elizabeth, to Henry Scott, 3rd Duke of Buccleuch, 5th Duke of Queensberry. From the mid-eighteenth century, Boughton House was little used or altered, but was well cared for.

Because of this it has some of the best preserved baroque state rooms in the British Isles. According to Robert Edmonds, land steward at Boughton House in 1797, “In the year 1792 Boughton gardens were thrown open to the park and the deer and other stock were admitted.

A considerable improvement has been made in them by means of the mud which was taken out of the ponds.”

In the late twentieth century, Boughton became the dower house of Mary (“Mollie”), Duchess of Buccleuch, widow of the 8th Duke, who brought it back to life.

Following the death of Dowager Duchess Mollie in 1993, the 9th Duke opened Boughton to small tours through arts organisations, and the house is now open to the general public for guided tours for a few weeks each year.

Northampton Museum and Art Gallery is a public museum in Northampton, .  owned and run by Northampton Borough Council and claims to house the largest collection of shoes in the world, with over 12,000 pairs.

The town’s museum was established in 1865, but moved to the current site in 1884, where it shared its space with the town’s library.

After the library moved in 1910, the museum took over the whole building.[2] In 2012, the museum was refurbished for better access. The museum closed in February 2017 to allow work to start on a major expansion project; the new museum is expected to re-open in early 2020.

which was designated as being of international importance by the Museums, Libraries and Archives Council in 1997.

The ground floor is given over to the display of some of the museum’s 12,000 pairs of shoes, spanning the period from the Ancient Egyptians to the present day.

There are also two galleries dedicated to footwear: Life & Sole focuses on the history of shoemaking and contains a re-creation of an old shoe factory; Followers of Fashion concentrates on the history of fashions in footwear throughout the centuries.

Some of the paintings on display reflect the museum’s focus on footwear, such as the 17th-19th century Dutch and Flemish works by Jan Miel and Hendrik van Oort featuring cobblers, shoemakers and shoeshiners

.As long-time Keeper of the Boot and Shoe Collection, curator June Swann played a significant role in its development. She began in 1950, and worked there for 38 years.

The second and third floors of the museum house exhibits about Northampton’s history and displays of Oriental ceramics and Italian art from the 15th to the 18th century.

Probably the Oldest Amusement Park in the UK

Wicksteed Park in Kettering, Northamptonshire, The park opened in 1921.

The Park was founded by Charles Wicksteed, the son of a Unitarian minister of the same name and his wife Jane Lupton.

The couple met when Charles Senior arrived in Leeds in 1835 to lead Mill Hill Chapel, at the heart of that industrial city, and two years later they married.

The Lupton family was long-established there, and the Wicksteeds’ children were born into a prosperous, socially active, politically involved dynasty, including educationalists, philanthropists, factory owners, and businessmen.

In 1841 Charles Senior’s sister Elizabeth married Jane’s brother Arthur , also a Unitarian minister; Uncle Arthur was, according to a family history, “The Achilles of the Leeds Complete Suffrage Association”- in other words, a tragic champion of the fight for universal suffrage. 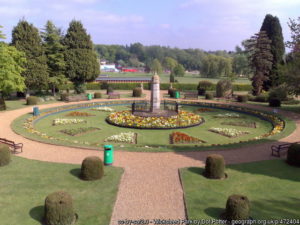 Charles Junior was one of twenty one children, including Janet, who wrote, as Mrs Lewis, a memoir including her parents; Philip (Henry), the economist and Unitarian theologian; and (Joseph) Hartley, president of the Institute of Mechanical Engineers[

They had the maverick MP and mining engineer Arnold Lupton as their first cousin. One of their nieces was Mary Cicely Wicksteed, who married the prominent Australian surgeon Sir Hibbert Alan Stephen Newton

Charles Junior set up Charles Wicksteed & Co. Ltd in 1876, based in Digby Street in Kettering, which produced items such as the first hydraulic hacksaw, the original automatic gearbox, sawing machinery, wooden toys and power drills. 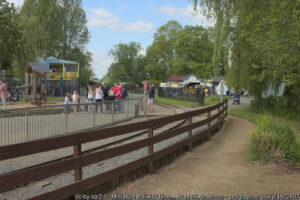 In 1913 he purchased a tract of Northamptonshire meadowland nearby with the intention of developing a model village. He wanted to create an open space and safe parkland for local families.

To celebrate the end of the First World War, his factory purportedly removed a number of central heating pipes from its premises and used them to build swings for children, creating the first commercial playground.

The success of the initiative eventually led to the founding of Wicksteed Playscapes, the world’s first playground manufacturing company, which is still operating.  His main bequest was Wicksteed Park.

The Park’s fame spread far and wide and special trains and charabancs brought visitors from an ever-widening area. Wicksteed Park was the second leisure park in the UK and has been copied many times since. Upon the death of Charles Wicksteed, the board of trustees was determined to continue his work.

Open all year round, the children’s playground is the largest free facility of its kind in Europe.

Of historical interest is the Water Chute, which was built in 1926. Having undergone major renovation (in 2002), it is the oldest working ride in the UK. The Park has a narrow gauge railway which runs around the lake.