Northumberland – Wild & Beautiful, Visit Lindisfarne Is a Must! 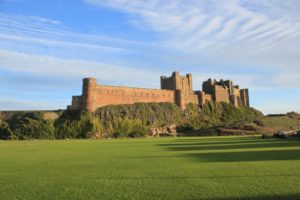 by the village of Bamburgh in Northumberland. It is a Grade I listed building.

Now here’s a potted history of the castle

The site was originally the location of a Celtic Brittonic fort known as Din Guarie and may have been the capital of the kingdom of Bernicia from its foundation in c. 420 to 547.

After passing between the Britons and the Anglo-Saxons three times, the fort came under Anglo-Saxon control in 590.

The fort was destroyed by Vikings in 993, and the Normans later built a new castle on the site, which forms the core of the present one. After a revolt in 1095 supported by the castle’s owner, it became the property of the English monarch.

In the 17th century, financial difficulties led to the castle deteriorating, but it was restored by various owners during the 18th and 19th centuries. It was finally bought by the Victorian era industrialist William Armstrong, who completed its restoration. The castle still belongs to the Armstrong family and is open to the public.

Now this might seem like a strange story to some but here we like to bring you unsual stories about the area’s historical champions who went above and beyond for their communities, this lady certainly did! 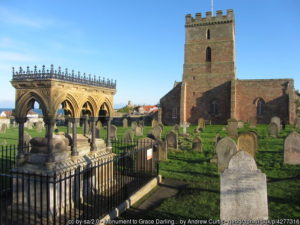 Grace Horsley Darling (24 November 1815 – 20 October 1842) was an English lighthouse keeper’s daughter, famed for participating in the rescue of survivors from the shipwrecked Forfarshire in 1838. The paddlesteamer ran aground on the Farne Islands off the coast of Northumberland in northeast England; nine members of her crew were saved.

Grace Darling was born on 24 November 1815 at her grandfather’s home in Northumberland. She was the seventh of nine children born to William and Thomasin Darling, and when only a few weeks old she was taken to live on Brownsman Island, one of the Farne Islands, in a small cottage attached to the lighthouse.

Her father ran the lighthouse (built in 1795) for Trinity House 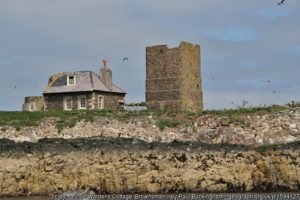 safety, so in 1826 the family moved to the newly constructed lighthouse on Longstone Island.

Longstone Lighthouse had better accommodation, but the island itself was slightly less hospitable, so William would row back to Brownsman to gather vegetables from their former garden and to feed the animals.

The family spent most of their time on the ground floor of the lighthouse which consisted of a large room, heated by a wood stove. The room was their living room, dining room and kitchen in one and had a spiral staircase leading to three bedrooms above and the light at the top of the tower.

In the early hours of 7 September 1838, Darling, looking from an upstairs window, spotted the wreck and survivors of the Forfarshire on Big Harcar, a nearby low rocky island. The Forfarshire had foundered on the rocks and broken in half: one of the halves had sunk during the night.

She and her father William determined that the weather was too rough for the lifeboat to put out from Seahouses , so they took a 21 ft, 4-man Northumberland coble) across to the survivors, taking a long route that kept to the lee side of the islands, a distance of nearly a mile.

Darling kept the coble steady in the water while her father helped four men and the lone surviving woman, Sarah Dawson, into the boat. Although she survived the sinking, Mrs. Dawson had lost her two young children (James, 7, and Matilda, 5) during the night.William and three of the rescued men then rowed the boat back to the lighthouse. Darling then remained at the lighthouse while William and three of the rescued crew members rowed back and recovered four more survivors.

Meanwhile, the lifeboat had set out from Seahouses but arrived at Big Harcar rock after Darling and her father had completed their rescue operation: all they found were the bodies of Mrs Dawson’s children and of a clergyman.

The Forfarshire had been carrying 62 people. The vessel broke in two almost immediately upon hitting the rocks.

All that remained at daybreak was the portside paddlebox casing. Nine other passengers and crew had managed to float off a lifeboat from the stern section before it too sank, and were picked up by a passing ship

As news of her role in the rescue reached the public, her combination of bravery and simple virtue set her out as exemplary, and led to an uneasy role as the nation’s heroine. Grace and her father were awarded the Silver Medal for bravery by the Royal National Institution for the Preservation of Life from Shipwreck.

Subscriptions and donations totaling over £700 were raised for her, including £50 from Queen Victoria; more than a dozen portrait painters sailed to her island home to capture her likeness, and hundreds of gifts, letters, and even marriage proposals were delivered to her.

Her unexpected wealth and fame were such that the Duke of Northumberland took on a role as her self-appointed guardian and founder of a trust, established to look after the donations offered to her. His personal gifts to her and her family included a timepiece and a silver teapot.

The Holy Island of Lindisfarne,

also known simply as Holy Island, is a tidal island which constitutes the civil parish of Holy Island in Northumberland.

Holy Island has a recorded history from the 6th century AD; it was an important centre of Celtic Christianity under Saints Aidan of Lindisfarne, Cuthbert, Eadfrith of Lindisfarne and Eadberht of Lindisfarne.

After the Viking invasions and the Norman conquest of England, a priory was reestablished. A small castle was built on the island in 1550.

The monastery of Lindisfarne was founded circa 634 by Irish monk Saint Aidan, who had been sent from Iona off the west coast of Scotland to Northumbria at the request of King Oswald.

The priory was founded before the end of 634 and Aidan remained there until his death in 651. 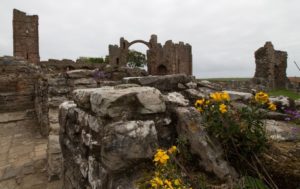 The priory remained the only seat of a bishopric in Northumbria for nearly thirty years. Finian (bishop 651–661) built a timber church “suitable for a bishop’s seat”. St Bede, however, was critical of the fact that the church was not built of stone but only of hewn oak thatched with reeds.

A later bishop, Eadbert, removed the thatch and covered both walls and roof in lead. 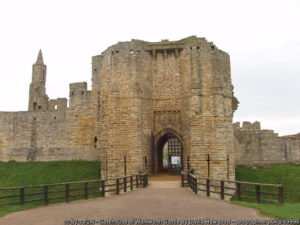 The village and castle occupy a loop of the River Coquet, less than a mile from England’s north-east coast.

When the castle was founded is uncertain: traditionally its construction has been ascribed to Prince Henry of Scotland, Earl of Northumbria, in the mid-12th century, but it may have been built by King Henry II of England when he took control of England’s northern counties.

Warkworth Castle was first documented in a charter of 1157–1164 when Henry II granted it to Roger fitz Richard. The timber castle was considered “feeble”, and was left undefended when the Scots invaded in 1173.

Roger’s son Robert inherited and improved the castle. Robert was a favourite of King John, and hosted him at Warkworth Castle in 1213. 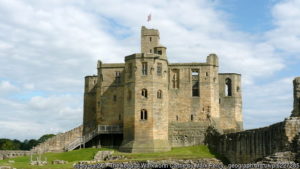 The castle remained in the family line, with periods of guardianship when heirs were too young to control their estates. King Edward I stayed overnight in 1292 and John de Clavering, descendant of Roger fitz Richard, made the Crown his inheritor. With the outbreak of the Anglo-Scottish Wars, Edward II invested in castles including Warkworth where he funded the strengthening of the garrison in 1319.

Twice in 1327 the Scots besieged the castle without success.

John de Clavering died in 1332 and his widow in 1345, at which point The 2nd Baron Percy of Alnwick took control of Warkworth Castle, having been promised Clavering’s property by Edward III. Henry Percy, 1st Earl of Northumberland, added the imposing keep overlooking the village of Warkworth in the late 14th century.

The fourth earl remodelled the buildings in the bailey and began the construction of a collegiate church within the castle, but work on the latter was abandoned after his death.

Although The 10th Earl of Northumberland supported Parliament during the English Civil War, the castle was damaged during the conflict. The last Percy earl died in 1670. In the mid-18th century the castle found its way into the hands of Hugh Smithson, who married the indirect Percy heiress.

He adopted the surname “Percy” and founded the dynasty of the Dukes of Northumberland, through whom possession of the castle descended.

In the late 19th century, the dukes refurbished Warkworth Castle and Anthony Salvin was commissioned to restore the keep.

The 8th Duke of Northumberland gave custody of the castle to the Office of Works in 1922.

Since 1984 English Heritage has cared for the site, which is a Grade I listed building and a Scheduled Ancient Monument.

Is the northernmost town in England, at the mouth of the River Tweed on the east coast, 2 1⁄2 miles  south of the Scottish border 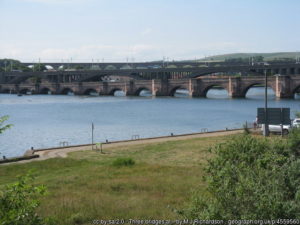 Berwick was founded as an Anglo-Saxon settlement during the time of the Kingdom of Northumbria, which was annexed by England in the 10th century.

The area was for more than 400 years central to historic border wars between the Kingdoms of England and Scotland, and several times possession of Berwick changed hands between the two kingdoms. 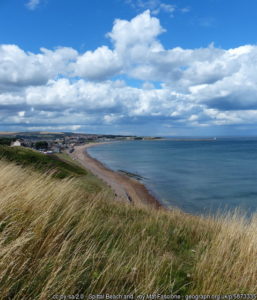 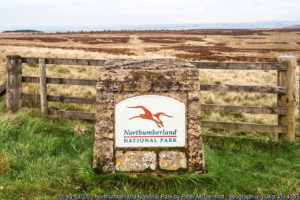 is the northernmost national park in England. It covers an area of more than 1,050 square kilometres  between the Scottish border in the north to just south of Hadrian’s Wall, and it is one of the least populated and least visited of the National Parks.

The park lies entirely within Northumberland, covering about a quarter of the county.

The park covers several distinct areas. In the north are the Cheviot Hills, a range of hills that mark the border between England and Scotland. Further south, the hills give way to areas of rolling moorland, some of which have been covered by forestry plantations to form Kielder Forest.

The southernmost part of the park covers the dramatic central section of Hadrian’s Wall, dating from the Roman occupation.

The 10,000-year history of human habitation of the region is explored through the many archaeological sites, ranging from prehistoric monuments and Roman remains to Pele towers, constructed as a defence against Border Reivers.

The Park’s official symbol is the curlew.