NOTTINGHAMSHIRE – Made Famous By the Robin Hood Legand

NOTTINGHAMSHIRE – It’s just a great county to visit, both the history and the astoundingly beautiful countryside including the forest made famous by the legend that was Robin hood. There’s much to see and do

Nottingham has links to the legend of Robin Hood and to the lace-making, bicycle (notably Raleigh bikes), and tobacco industries. 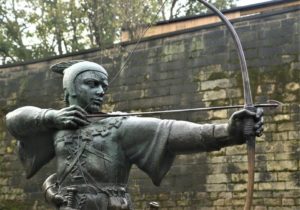 It was granted its city charter in 1897 as part of Queen Victoria’s Diamond Jubilee celebrations.

On 11 December 2015, Nottingham was named a “City of Literature” by UNESCO, joining Dublin, Edinburgh, Melbourne and Prague as one of only a handful in the world.

The title reflects Nottingham’s literary heritage, with Lord Byron, D. H. Lawrence and Alan Sillitoe having links to the city, as well as a contemporary literary community, a publishing industry and a poetry scene. 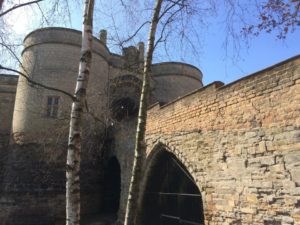 Nottingham Castle, is located in a commanding position on a natural promontory known as “Castle Rock”, with cliffs 130 feet  high to the south and west.

In the Middle Ages it was a major royal fortress and occasional royal residence. It fell into decline by the 16th century, it was largely demolished in 1649.

The Duke of Newcastle later built a mansion on the site, which was burnt down by rioters in 1831 and left as a ruin. 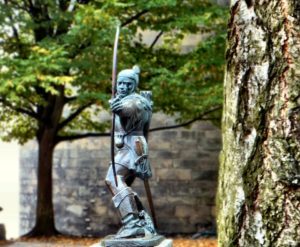 Just one of the many statues for Robin Hood

It was later rebuilt to house an art gallery and museum, which remain in use. Little of the original castle survives, but sufficient portions remain to give an impression of the layout of the site.

Medieval history The first Norman castle on Castle Rock was a wooden structure of a motte-and-bailey design, begun in 1068, two years after the Battle of Hastings, on the orders of William the Conqueror.

Edward III used the castle as a residence and held Parliaments. In 1346 King David II of Scotland was held prisoner. In 1365 Edward III improved the castle with a new tower on the west side of the Middle Bailey and a new prison under the High Tower.

In 1376 Peter de la Mare, speaker of the House of Commons was confined in Nottingham Castle for having ‘taken unwarrantable liberties with the name of Alice Perrers, mistress of the king’. 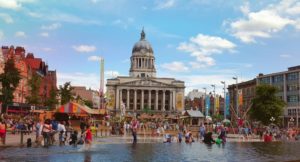 The Civil War & Where Charles rallied his troops

A short time following the outbreak of the English Civil War, the castle was already in a semi-ruined state after a number of skirmishes occurred on the site.

At the start of the Civil War, in August 1642, Charles I chose Nottingham as the rallying point for his armies, but soon after he departed, the castle rock was made defensible and held by the parliamentarians.

Commanded by John Hutchinson, they repulsed several Royalist attacks, make his way to Europe. In 1651, two years after the execution of Charles I in 1649, the castle was razed to prevent it being used again.

After the restoration of Charles II in 1660, the present ‘Ducal Mansion’ was built by Henry Cavendish, 2nd Duke of Newcastle between 1674 and 1679 on the foundations of the previous structure. 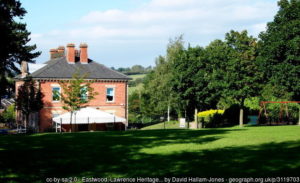 The D. H. Lawrence Birthplace Museum is situated in Eastwood, near Nottingham.

It is the house in which he was born in 1885, and one of the four houses the family occupied in Eastwood. Now a museum, visitors can visit the building via guided or self-guided tour. 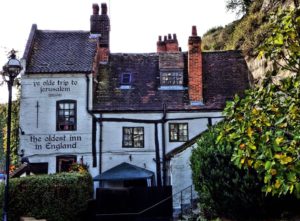 Ye Olde Trip to Jerusalem is a public house in Nottingham which claims to have been established in 1189;  its tricky to know whether this date is true but it certainly is a fine old ale house.

The building rests against Castle Rock, upon which Nottingham Castle is built, and is attached to several caves, carved out of the soft sandstone. These were reputedly originally used as a brewhouse for the castle, dating from the medieval period.

is a royal forest, famous by its historic association with the legend of Robin Hood. 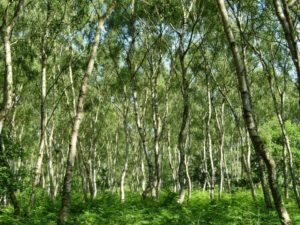 Today, Sherwood Forest National Nature Reserve encompasses  1,045 acres  surrounding the village of Edwinstowe, the site of Thoresby Hall. It is a remnant of an older, much larger, royal hunting forest, which derived its name from its status as the shire  wood of Nottinghamshire, which extended into several neighbouring counties (shires), bordered on the west along the River Erewash and the Forest of East Derbyshire.

When the Domesday Book was compiled in 1086, the forest covered perhaps a quarter of Nottinghamshire in woodland and heath subject to the forest laws.

Founded in 1885 by Woodhead and Angois . Using Raleigh as their brand name, it is one of the oldest bicycle companies in the world. After being acquired by Frank Bowden in December 1888, it became The Raleigh Cycle Company, which was registered as a limited liability company in January 1889.

By 1913, it was the largest bicycle manufacturing company in the world. From 1921 to 1935, Raleigh also produced motorcycles and three-wheel cars, leading to the formation of Reliant Motors.

In 2006, the Raleigh Chopper was named in the list of British design icons in the Great British Design Quest organised by the BBC and the Design Museum…

Want accommodation in Nottinghamshire – then you are in the right place – scroll through the listings on this site and find your perfect accommodation, right here, right now