Pen Dennis Castle – A “Must Visit” Site at Falmouth

Pen Dennis Castle – A “Must Visit” Site at Falmouth

If you’re planning a visit to Cornwall the chances are you’ll visit Falmouth and if you do then a tour round Pen Dennis Castle is a must there’s loads to see and do, here’s just a few details 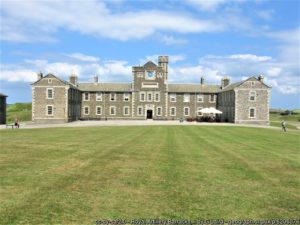 Located on a headland with breath-taking views out to sea, Pen Dennis Castle is one of Henry VIII’s finest coastal fortresses. The picturesque castle has defended Cornwall since Tudor times and played a vital role during the two World Wars.

Today, you can experience the sights and sounds of battle, meet costumed characters from Pen Dennis’ past, look out for enemies, and witness the daily firing of a historic gun (Apr – Oct). Don’t miss our fascinating exhibition, ‘Fortress Falmouth and the First World War’, which examines life at the castle during WW1.

It was an artillery fort constructed by Henry VIII near Falmouth, between 1540 and 1542. It formed part of the King’s programme to protect against invasion from France and the Holy Roman Empire, and defended the Carrick Roads waterway at the mouth of the River Fal. This stretch of water was an important anchorage serving shipping arriving from the Atlantic and the Mediterranean.

Traditionally the Crown had left coastal defences to the local lords and communities, only taking a modest role in building and maintaining fortifications, and while France and the Empire remained in conflict with one another, maritime raids were common but an actual invasion of England seemed unlikely 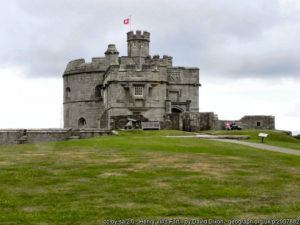 The original, circular keep and gun platform was expanded at the end of the century to cope with the increasing Spanish threat, with a ring of extensive stone ramparts and bastions built around the older castle.

A small gun tower, called the Little Dennis Blockhouse, was built in 1539 overlooking the entrance, and plans were made to protect the anchorage further with five additional castles. In the event, only two of these were constructed, Pen Dennis and St Mawes Castle, positioned on each side of Carrick Roads and able to provide overlapping fire across the water.

Pen Dennis saw service during the English Civil War, when it was held by the Royalists, and was only taken by Parliament after a long siege in 1646. Charles II renovated the fortress after his restoration to the throne in 1660.

Ongoing concerns about a possible French invasion resulted in Pen Dennis’s defences being modernised and upgraded in the 1730s and again during the 1790s; during the Napoleonic Wars, the castle held up to 48 guns. 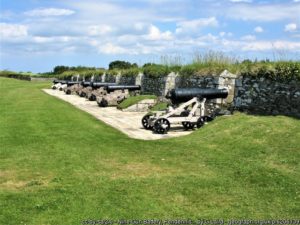 In the 1880s and 1890s an electrically operated minefield was laid across the River Fal, operated from Pen Dennis and St Mawes, and new, quick-firing guns were installed to support these defences.

The castle saw service during both the First and Second World Wars, but in 1956, by now obsolete, it was decommissioned. The Ministry of Works took over, and cleared away many of the more modern military buildings and opened the site to visitors.