Update - May 2021: Please see our statement here about the Coronavirus situation in the UK. 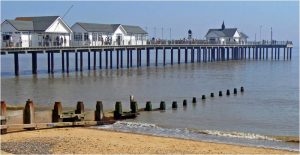 Whether it be re-kindling our memories of seaside holidays as children or introducing a new generation to this great British heritage, take time once again to stroll along our piers, and wonder at the fine achievements of Victorian engineering, enjoying the experience with nostalgic affection.

Whilst several of our piers still face an uncertain future, we can nevertheless celebrate the achievements and sterling efforts of those who have sought to save and restore our piers for the ongoing enjoyment of all. Whilst every pier is unique, we have selected a few well-worth making that trip to the coast.

Cleethorpes
Receiving the accolade of ‘Pier of the Year 2016’ following an amazing restoration by its new owner, which included the painstaking reinstatement of the ‘three owls’ stained glass window on the front of the building, alongside the addition of new features, this is a historic venue boasting stunning views.

Southwold
This classic pier, originally built in 1900 at a length of 810ft, suffered storm damage over several decades as well as a drifting sea mine which reduced it to just 60ft. It was privately bought and rebuilt extending it to a length of 623ft long. With traditional entertainment in keeping with the Victorian heyday of pleasure piers, it is heralded as ‘Britain’s only 21st century pier’.

2016 has seen the official re-opening of the pier following a 14.2 million rebuild, the local community having campaigned long and hard to save it, refusing to give up even when it was virtually destroyed by fire in 2010. This pier, rebuilt against the odds, surely represents more than a building.

Cleveden
This elegant structure is Britain’s only Grade I listed pier surviving intact. Built in the 1860s with wrought-iron supports from Isambard Kingdom Brunel’s discarded South Wales railway lines, it was described as ‘’the most beautiful pier in England’’ by poet, writer and broadcaster, the late Sir John Betjeman.

Llandudno
A splendid pier constructed in 1878 of wrought iron lattice girders and finished with traditional wooden decking, stretching out to 2295ft, it is the longest in Wales and provides spectacular views.

If you are out and about exploring the coast this summer, check out our specially chosen B&Bs for your accommodation needs:-

Map of our B&Bs

Our B&B guides by county

B&Bs in Southwold
B&Bs in Hastings