AN EXTRAORDINARY, ROMANTIC, PART-GOTHIC HISTORIC HOUSE NEAR PETERBOROUGH IN CAMBRIDGESHIRE, THAT HAS BEEN IN THE PROBY FAMILY FOR 400 YEARS

Elton Hall is a baronial hall in Elton, Cambridgeshire. It has been the ancestral home of the Proby family (sometime known as the Earls of Carysfort) since 1660.

The hall lies in a 3,800-acre estate through which the River Nene runs. The building incorporates 15th-, 17th-, 18th- and 19th-century parts and is a Grade I listed building.

Elton Hall is 2 miles from Fotheringhay Castle, where Mary, Queen of Scots was executed in 1587.

The Victorian gardens have been skilfully restored in recent years and contain a knot garden, a new rose and herbaceous garden, fine hedges and a Gothic orangery built to celebrate the Millennium. The gardens are promoted by the Campaign to Protect Rural England. 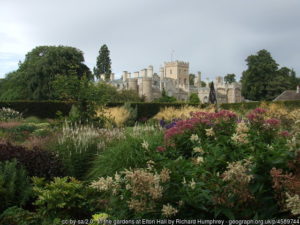 Robert Sapcote was probably the last of his family to live at Elton. His ledger stone formerly in the chapel of Elton Hall survives in Elton Church

Shortly after 1617 Elton was purchased by Sir Peter Proby, a former Lord Mayor of London, from the Sapcote family. The house was rebuilt between 1662 and 1689 by his grandson Sir Thomas Proby, 1st Baronet, incorporating the chapel and gatehouse of a previous 15th century building. A new wing was also added to the west.

In about 1855 it descended to Granville Leveson Proby, 3rd Earl of Carysfort, who employed the architect Henry Ashton to remodel the house, rebuilding the north-west cross wing and refacing other wings in stone.

The south front (garden) incorporates the 15th century tower and chapel which were built at the time of Henry VII. The Marble Hall and main staircase were designed by Henry Ashton and are remarkable examples of a mid-Victorian revival of mid-18th-century style.

The Drawing Room, the largest room in the house, was formed from the medieval chapel around 1740. The 18th century ceiling with its enriched cornice and frieze remains, but the present decoration dates from 1860. The Dining Room was built in 1860 and was also designed by Ashton. The three large Gothic windows are exact copies of the windows that were in the north wall of the medieval chapel.

The Library contains a large collection of books From the Main Library a short passage leads to the Inner Library situated in the medieval Sapcote Tower. Other rooms of special interest are the Lower and Upper Octagon rooms, the Yellow Drawing Room and the Ante Dining room. The current chapel was formed from part of the undercroft of the Sapcotes’ chapel and has 15th century vaulting. 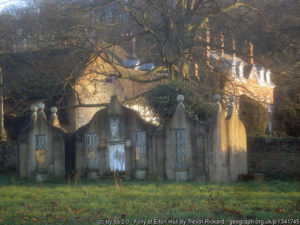 Elton Hall is nestled in the beautiful countryside on the Cambridgeshire/Northamptonshire border, lying eight miles southwest of Peterborough. It stands proud in unspoilt landscaped parkland where a house has stood since the 12th century.

Elton Hall is enchanting and there is something romantic and magical about the building with its gothic south elevation set at a right angle to the classical, French inspired, entrance wing. Successive generations have embellished both the house and collection, which contains many Old Masters and fine examples of English portraiture.

A visit, which also includes the recently restored gardens, provides the visitor with a fascinating insight into British history and taste.

Sir William and Lady Proby and their four daughters Alexandra, Alice, Rose & Isabella, continue to maintain and preserve their home and welcome visitors to the Hall. There is something for everyone to see, from the State Coach used by the family to attend the Diamond Jubilee celebrations of Queen Victoria, to Henry VIII’s Prayer Book, given to him by Katherine Parr who had herself, been given the Manor of Elton by Henry VIII after their marriage.

The Proby family originally came from Chester. Sir Peter Proby was the first family member to acquire land at Elton when he bought a lease of the Manor of Elton for the sum of £850 in 1595. He acquired further leases from Queen Elizabeth in 1602, was Lord Mayor of London in 1622 and knighted in 1623, the year before he died.   His grandson, Sir Thomas Proby, married a local heiress, Frances Cotton, and was created a baronet in 1662. They acquired the site of the Hall and built a fine Restoration house between 1665-1668, which incorporated the medieval chapel and gatehouse of the original Manor House.

Successive generations of the family served either as MP’s or in the Navy. The 1st Earl of Carysfort was an Envoy to the Court of Berlin and served as a Minister under Lord Grenville in 1806. His son, the 3rd Earl, began his career as a Midshipman under Nelson at the Battle of the Nile and later became an Admiral. The collection is an amalgam of two houses, as the contents of Glenart Castle, the Irish seat of the Carysforts, were brought over in the early 1920s.

The house contains superb treasures, including fine French furniture, one of the best libraries in private hands and a magnificent collection of paintings. Art enthusiasts can gaze upon works by Renaissance artists dating from the early 15th century, to marvellous 19th century works by J.F. Lewis, Landseer and Millais. The collection also has works by renowned British artists, Gainsborough, Constable and Reynolds.

is part of the undercroft of the original medieval chapel built by the Sapcote family. The vaulted ceiling remains as it was originally built and the room was consecrated as a Chapel after the War.   We still use it for services and family christenings. 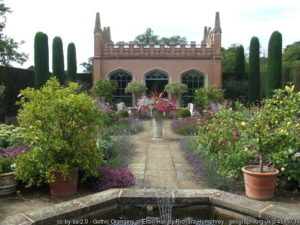 The visitor leaves the Chapel through the Lower Octagon Room. The foundations of this room could date from the seventeenth century but later work in the 1720’s predominates. The 18th century view over the fireplace is of Dublin harbour and represents some of the land inherited by the 1st Lord Carysfort when he married the Irish heiress, Elizabeth Allen.

The Marble Hall and main staircase were designed by the 3rd Earl’s architect, Henry Ashton. They are a remarkable example of mid-Victorian eighteenth-century revival architecture. The Hall contains many portraits of the family from Sir Thomas Proby to the 5th Earl of Carysfort. From the bottom of the stairs it is possible to look into the Yellow Drawing Room with paintings of the Irish house in the eighteenth century and highly unusual Japanese lacquer cabinets made for William Beckford. The Panelled Hall at the far end is lined with 17th century Flemish panelling, originally from the Town Hall in Antwerp.

The Upper Octagon Room and Drawing Room are the centrepiece of the house. The Drawing Room was created out of the medieval chapel. If you climb on the roof you can see the outline of the East window. In the early 18th century the room was a library and two small watercolours show the visitor what it would have looked like. In 1860, the bookcases were taken out and put in the library next door; the fireplace was moved to the Dining Room and intricate and grand pilasters were added, creating spaces to hang silk.

Elaborate curtains in the same material were made. The room is still furnished in a similar style and the Reynolds’ portraits remain where they were first hung.  The 1st Earl of Carysfort was one of the pallbearers at Sir Joshua’s funeral and considered himself a friend.

Today it houses many of the best pictures in the house. It is a magnificent display and contains pictures from the time of Sir Thomas Proby to Old Masters collected by the 5th Earl of Carysfort in the late 19th century.

Elton has three libraries of which two are open to visitors. It is a continuous collection from the 17th to 20th century and contains an outstanding collection of English bibles and Prayer Books, including the Prayer Book of Henry VIII given to him by his sixth wife, Katherine Parr. 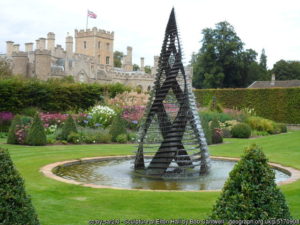 The gardens provide a stunning backdrop to the house. Prints displayed in the house show how Sir Thomas Proby first laid out his garden in the 1670’s and how it developed during the 18th century. During the 19th century the family really gardened in Ireland and Elton was left with a small shrubbery, some topiary and the parkland you see today.

…was part of the original design by Hallam Murray. It used to be planted with bedding out such as ageratums and salvias. It has now been surrounded by a low wall and generously planted with many herbaceous perennials and small shrubs. Crisply cut topiary of the family dog, the crest and peacocks frame the house. Half of them are recent additions and they help to balance the setting of the house between the parterre, lawns and paths.

…was originally the Edwardian Rose Garden. However by 1980, this was in a poor state of repair. Three years later the garden was replanted as the hornbeam hedging to create gardens within a garden.

The Orangery Garden and Orangery

Were created to celebrate the Millenium. The building was designed to reflect the Gothic façade of the South Front. The small gardens are surrounded by tall yew hedges, which once enclosed a Bowling Green before the First World War. These are sumptuously planted with Mediterranean species and oranges and lemons in terracotta pots.

Topiary and the Shrub Garden

Elton Hall has some magnificent topiary that has been created over the last 30 years. The Shrub Garden was designed to provide some shade and a cool green space between the other gardens.

Wanting to Know More ? then check out their website: http://eltonhall.com/