Planning a Visit to Staffordshire?

Planning a Visit to Staffordshire?

Biddulph Grange is a National Trust landscaped garden, located near Stoke-on-Trent, Staffordshire, (It is separate from Biddulph Grange Country Park.)

As the Independent on Sunday Newspaper quoted “Behind a gloomy Victorian shrubbery there’s a gloomy Victorian mansion, but behind that lurks one of the most extraordinary gardens in Britain…it contains whole continents, including China and Ancient Egypt – not to mention Italian terraces and a Scottish glen.”

The “rhododendrons and azaleas are spectacular in late spring, but the pinetum and the evergreen topiary provide year-round interest. It’s a fantastic garden for children, with its tunnels and rockeries, and there is a children’s quiz trail.”

The true brilliance of Biddulph Grange “lies in the way that Cooke and Bateman hid the different areas of the garden from each other, using heaps of rocks and thickly planted shrubberies’ the design locks together as tightly as a jigsaw or a cross-section of the brain.”

It contains “a series of Italianate terraces, connected by steps and enclosing small flower gardens’ at the bottom, long, buttressed hedges enclose a dahlia walk,” In the Egyptian part of the garden, “Two sphinxes guard the mastaba-like entrance to a tunnel, whose darkness is an invitation to explore. Deep inside is a bloody chamber (lit by a hidden window of red-coloured glass) in which squats the half-spooky, half-comic figure of the Ape of Thoth.” 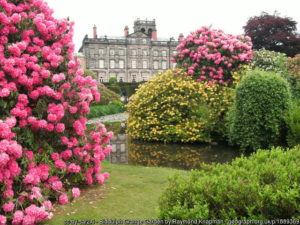 The garden is divided into many different areas with themes including:

Biddulph Grange was developed by James Bateman, the accomplished horticulturist and landowner; he inherited money from his father, who had become rich from coal and steel. He moved to Biddulph Grange around 1840, from nearby Knypersley Hall.

He created the gardens with the aid of his friend and painter of seascapes Edward William Cooke who was not just a keen designer but whose father-in-law owned one of the biggest plant nurseries of the day, Loddiges of Hackney The gardens were meant to display specimens from Bateman’s extensive and wide-ranging collection of plants, and he used specimens brought back by the great Victorian plant-hunters and he became an expert on orchids

Bateman was president of the North Staffordshire Field Society, and served on the Royal Horticultural Society’s Plant Exploration Committee. He especially loved Rhododendrons and Azaleas. Bateman was “a collector and scholar on orchids,

His gardens are a rare survival of the interim period between the Capability Brown landscape garden and the High Victorian style. The gardens are compartmentalised and divided into themes: Egypt, China, etc.

In 1861 Bateman and his sons, gave up the house and gardens, and moved to Kensington, London. Robert Heath bought Biddulph Grange in 1871. After the house burnt down in 1896, architect Thomas Bower rebuilt it.

The post-1896 house served as a children’s hospital from 1923 until the 1960s; known first as the “North Staffordshire Cripples’ Hospital” and later as the “Biddulph Grange Orthopaedic Hospital”

The 15 acres of garden became badly run-down and neglected during this period, and the deeply dug-out terraced area near the house around Dahlia Walk was filled in level to make a big lawn for patients to be wheeled out on in summertime. The Bateman property was (and still is) divided: the hospital got the house and its gardens, and the uncultivated remainder of Biddulph Grange’s land became the Biddulph Grange Country Park.

Until 1991 the house and gardens “housed an orthopaedic hospital, for the best part of a century the gardens decayed, visited only by passing vandals and, more rarely, intrepid folly-hunters.”

In 1988 the National Trust took ownership of the property and its gardens, which have now been nearly fully restored, including digging out the Dahlia Walk area archaeology-style to find forgotten features. In 1995–96 the Wellingtonia Walk, was clear felled and replanted.

James Bateman created the stunning and magical garden we know today. He lived at a time when plant hunters were risking life and limb to scour the world and bring back plants and trees never seen before in Britain. Biddulph remains one of Britain’s most important historic gardens.

In a series of theatrical garden tableaux, Bateman brought together a dynamic collection of extraordinary new plants from China, Sikkim, and America and beyond. Rhododendrons came from Sikkim and Tibet via Joseph Hooker, who later became Director of the Royal Botanic Garden at Kew. Later, Bateman acquired plants from Robert Fortune’s collections in China, plants which formed the mainstay of the garden named China. 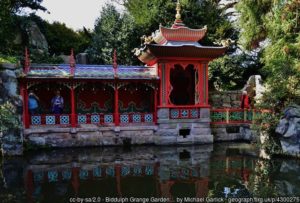 The garden also features summer bedding displays, a stunning Dahlia Walk and the oldest surviving golden larch in Britain, brought from China in the 1850s.

So impressive is the garden that it is Grade 1 listed, a grading given only to sites of the highest significance.

The oldest stumpery in the country

And the inspiration for many more around the country, including the one in the woods of Highgrove, Prince Charles’ home in Gloucestershire.

Biddulph Grange’s stumpery consists of a sunken path bordered by upside-down oak tree roots amongst which grow a great variety of ferns, delicate plants and mosses.

All the stumps are from oak trees

The stumps are packed close together, interlacing each other and reaching up to three or four metres. The path wriggles along between them, up and down, and in some places the stumps merge overhead to form a tunnel. It is, in a sense, a rockery made of wood.

Pathways in the stumpery

The stumpery was not meant to be a wooden work of art ornamented by a few small flowers and ferns, but as a scaffold for vigorously sprawling plants like cotoneaster and Virginia creeper which could haul themselves up into the surrounding trees. It was an early form of ‘wild gardening’.

Did You Know –Stumperies are a horticultural oddity

Stumperies have sometimes been described as Victorian horticultural oddities. They became features of 19th-century gardens, perhaps because of the popularity of ferns as garden plants at a time when hundreds of new species were introduced to Britain from around the world.

The stumpery at Biddulph Grange was designed in 1856. It was the first to be built anywhere and went on to be widely copied in many Victorian gardens

Biddulph Grange Garden is one of the most exciting survivals of the great age of Victorian gardening. The international scope of the garden has been compared to the Great Exhibition of 1851 and design features from the exhibition can be found in the garden’s sculptures.

The National Trust  have restored the Grade 1 listed garden to its Victorian heyday using historic descriptions and plans supported by archaeological evidence – the aim being to restore it as closely as possible to James Bateman’s original vision. The main source of inspiration and guidance for the restoration is an 1862 description of the gardens by Edward Kemp. First published in the Gardeners Chronicle, it is the only detailed description of the garden and grounds.

Restorations within the garden are ongoing; there are new things to see each year. The latest projects to be completed are the newly positioned hedges on Wellingtonia Avenue along with the restoration of the watchtower in the China garden which is now ready for you to climb. Ongoing projects include the restoration of the Geological Gallery (the garden’s original entrance) and the clearance and replanting of the Glen.

Two Sphinx guard the entrance to the tunnel in Egypt 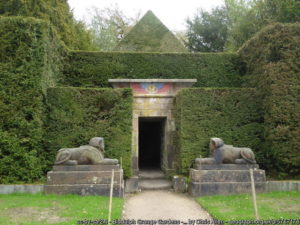 Go on a global expedition

The result is spectacularly picturesque including a Chinese landscape based on a willow pattern design; a glen; an Egyptian court and an Italianate garden. Integral to the garden are the rare and exotic plants from all over the globe as well as unusual features from the Victorian period. These include a stumpery, upside down trees and amazing rockwork.

A wide variety of wildlife can be seen, including numerous birds and insects.

Need Specialist B & B Accommodation?

Then The Little Green Book is what you need