Shropshire really does offer the traveller some terrific  heritage.

Travel up the  River Severn into Shropshire and you are soon at  The Ironbridge Gorge – a World Heritage Site. The ten museums and the Iron Bridge preserve the history of the birthplace of the Industrial Revolution.

The Ironbridge Gorge is a deep gorge, with  the River Severn flowing beneath  it. formed by a glacial overflow from the long drained away Lake Lapworth, at the end of the last ice age. 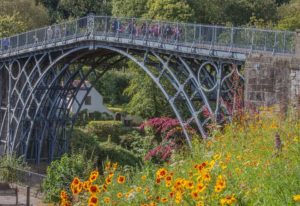 The deep exposure of the rocks cut through by the gorge exposed commercial deposits of coal, iron ore, limestone and fireclay, which enabled the rapid economic development of the area during the early Industrial Revolution.

Originally called the Severn Gorge, the gorge now takes its name from its famous Iron Bridge, the first iron bridge of its kind in the world, and a monument to the industry that began there. The bridge was built in 1779 to link the industrial town of Broseley with the smaller mining town of Madeley and the growing industrial centre of Coalbrookdale.

There are two reasons the site was so useful to the early industrialists. The raw materials, coal, iron ore, limestone and clay, for the manufacture of iron, tiles and porcelain are exposed or easily mined in the gorge. The deep and wide river allowed easy transport of products to the sea. 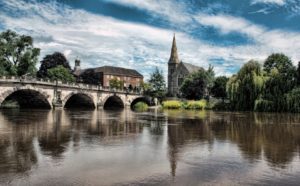 On up the river to the county town, Shrewsbury. A red sandstone castle guards the entrance to this medieval gem. Walk Fish Street. Then there’s Ludlow, another architectural treasure house, with its castle dominating the area. 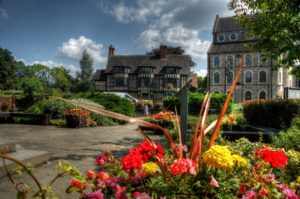 Shrewsbury is a lovely market town whose centre has a largely unspoilt medieval street plan and over 660 listed buildings, including several examples of timber framing from the 15th and 16th centuries. 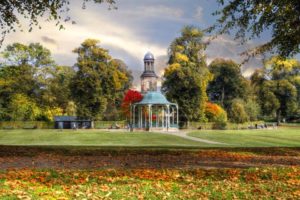 Shrewsbury Castle, a red sandstone fortification, and Shrewsbury Abbey, a former Benedictine monastery, were founded in 1074 and 1083 respectively by the Norman Earl of Shrewsbury, Roger de Montgomery

The town is the birthplace of Charles Darwin and is where he spent 27 years of his life.

Want to Visit Shewsbury and stay locally ? Then check out what we have locally – CLICK HERE NOW

Feel FREE to Call Us Today!