SOMERSET – offers so much for its visitors! 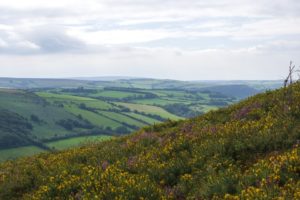 Let’s start with a walk on Exmoor, sharing it with the wild ponies, red deer and buzzards. The medieval village of Dunster lies on its eastern edge, dominated by its Norman castle and wooded slopes. At Oare, relive the classic Exmoor romantic novel ‘Lorna Doone’. Arthurian legend shrouds Glastonbury. King Arthur’s body is said to lie in the ruins of the abbey and Glastonbury Tor is supposed to be the mythical Avalon.

To Wells, and perhaps the most beautiful of England’s cathedrals. It’s stunning West Front features 300 statues of medieval kings, knights and saints.

Built between 1176 and 1450 to replace an earlier church on the site since 705, it is moderately sized for an English cathedral. Its broad west front and large central tower are dominant features in the city and countryside. 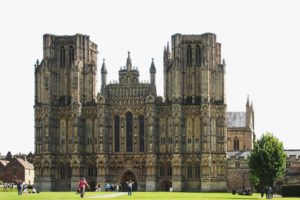 It has been called “unquestionably one of the most beautiful”and “most poetic” of English cathedrals. Its Gothic architecture is mostly in the Early English style of the late 12th–early 13th centuries, lacking the Romanesque work that survives in many other cathedrals. Building began about 1175 at the east end with the choir.

The east end retains a rare amount of ancient stained glass. unlike many cathedrals of monastic foundation, Wells has many surviving secular buildings linked to its chapter of secular canons, including the Bishop’s Palace and the 15th-century residential Vicars’ Close.The cathedral is a Grade I listed building.

It contains one of the most substantial collections of medieval stained glass in England,despite damage by Parliamentary troops in 1642 and 1643] The oldest surviving glass dates from the late 13th century and is in two windows on the west side of the chapter-house staircase. Two windows in the south choir aisle are from 1310

The Lady Chapel has five windows, of which four date from 1325–30 and include images of a local saint, DunstanThe east window was restored to a semblance of its original appearance by Thomas Willement in 1845. The other windows have complete canopies, but the pictorial sections are fragmented. 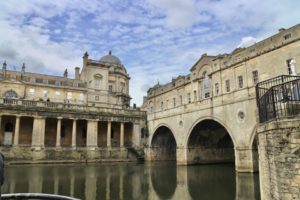 Bath is the largest city in Somerset, known for its Roman-built baths.

The city became a spa with the Latin name Aquae Sulis (“the waters of Sulis”) c. 60 AD when the Romans built baths and a temple in the valley of the River Avon, although hot springs were known even before then.

Bath Abbey was founded in the 7th century and became a religious centre; the building was rebuilt in the 12th and 16th centuries. In the 17th century, claims were made for the curative properties of water from the springs, and Bath became popular as a spa town in the Georgian era. Georgian architecture, crafted from Bath stone, includes the Royal Crescent, Circus, Pump Room and Assembly Rooms where Beau Nash presided over the city’s social life from 1705 until his death in 1761.

Many of the streets and squares were laid out by John Wood, the Elder, and in the 18th century the city became fashionable and the population grew. Jane Austen lived in Bath in the early 19th century. Further building was undertaken in the 19th century and following the Bath Blitz in World War II.

The city has software, publishing and service-oriented industries. Theatres, museums and other cultural and sporting venues have helped make it a major centre for tourism, with more than one million staying visitors and 3.8 million day visitors to the city each year.

There are several museums including the Museum of Bath Architecture, the Victoria Art Gallery, the Museum of East Asian Art, the Herschel Museum of Astronomy, Fashion Museum, and the Holburne Museum.

Stroll the Georgian gems Royal Crescent and The Circus, take tea at the Pump Rooms and take to the waters at the Roman Baths.

Some Somerset superlatives – at Cheddar. Its gorge is Britain’s largest; the Chedda Yeo, in Gough’s Cave, is its biggest underground river and the 9,000-year-old ‘Cheddar Man’ is its oldest complete skeleton. And the eponymous cheese is claimed to be the best! 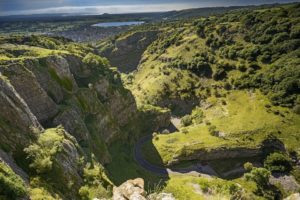 Cheddar Gorge is a limestone gorge in the Mendip Hills, near the village of Cheddar, The gorge is the site of the Cheddar show caves, where Britain’s oldest complete human skeleton, Cheddar Man, estimated to be over 9,000 years old, was found in 1903.[

Older remains from the Upper Late Palaeolithic era (12,000–13,000 years ago) have been found.  The caves, produced by the activity of an underground river, contain stalactites and stalagmites.

Cheddar Gorge, including the caves and other attractions, has become a tourist destination. Cheddar Gorge was named as the second greatest natural wonder in Britain, surpassed only by Dan yr Ogof caves. The gorge attracts about 500,000 visitors per year.

Bristol has much to offer. 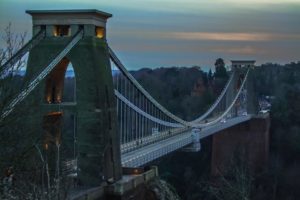 The Clifton Suspension Bridge spanning the Avon Gorge and the River Avon, linking Clifton in Bristol to Leigh Woods in North Somerset. Since opening in 1864, it has been a toll bridge, the income from which provides funds for its maintenance. The bridge is built to a design by William Henry Barlow and John Hawkshaw, based on an earlier design by Isambard Kingdom Brunel. It is a grade I listed building and forms part of the B3129 road.

The idea of building a bridge across the Avon Gorge originated in 1753. Original plans were for a stone bridge and later iterations were for a wrought iron structure. In 1831, an attempt to build Brunel’s design was halted by the Bristol riots, and the revised version of his designs was built after his death and completed in 1864. 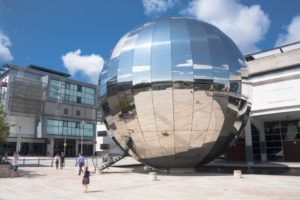 The Clifton Bridge Company initially managed the bridge under licence from a charitable trust. The trust subsequently purchased the company shares, completing this in 1949 and took over the running of the bridge using the income from tolls to pay for maintenance. The bridge is a distinctive landmark, used as a symbol of Bristol on postcards, promotional materials, and informational web sites. It has been used as a backdrop to several films and television advertising and programmes.

It has also been the venue for significant cultural events such as the first modern bungee jump in 1979, the last ever Concorde flight in 2003 and a handover of the Olympic Torch relay in 2012. 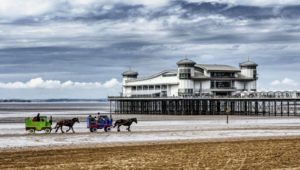 The beach and pier at Western Super Mare

Somerset’s popular gardens include the walled grounds of Cannington, Tintinhull and its 17th century house and Hestercombe, spanning three centuries. And don’t forget, Somerset is where the cider apples grow!