It’s finally official – Northumberland was voted the ‘Best UK Holiday County/Destination’ in the 2018 British Travel Awards! Whilst this will come as no surprise to many, we decided to discover for ourselves what makes this area so special!

Picture a magical world of ancient castles, rugged coastline and unspoilt beaches, rolling hills and meadowlands…peaceful walking trails and an abundance of wildlife…and this is just for starters!Boasting two Areas of Outstanding Natural Beauty as well as the magnificent landscape of the Northumberland National Park, famously featuring The Hadrian’s Wall Path and The Pennine Way, it has to be a walker’s paradise! 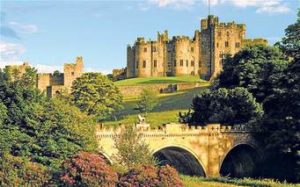 For garden enthusiasts, Alnwick Garden is in a league of its own, the inspiration of the Duchess of Northumberland that has turned this plot into the fabulous grounds it is today. Stand-outs from a visit have to be the 120 water jet Grand Cascade or eating in the treehouse restaurant, a dining experience like no other!

Stunning Bamburgh Castle perches high on a rocky plateau overlooking the coast with views to The Farne Islands and Lindisfarne and has been a popular location for many a film and TV set. A chequered history, the castle fell into disrepair, but fortunately for us today, it was bought by the Victorian inventor Lord William Armstrong who restored it to its former glory. 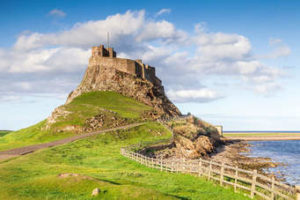 The Holy Island of Lindisfarne is a unique and special location accessed by a tidal paved causeway, cut off twice daily to the outside world. Visit 12th century Lindisfarne Priory, where the Lindisfarne Gospels played an integralrole in early Christianity in Anglo-Saxon England. Lindisfarne Castle set upon a sheer rock face presents a striking image. This year an exhibition bringing to life stories from the previous five centuries of the castle’s history is running until 3 November.A great haven for wildlife, important species of wildfowl and wading birds can be spotted overwintering on the island including pale-bellied Brent Geese, Widgeon, Grey Plovers and bar-tailed godwits. Before visiting the Island, please check the tide timetablefor safe crossing times for the causeway.

Northumberland International Dark Sky Park, covering 572 square miles, is the largest area of protected night sky in Europe. Awarded gold tier designation, it is officially the best place to gaze at the stars in England.

Please look at the following link for more information and ideas about Northumberland as well as a selection of superb B&B accommodation:- Northumberland County and B&B Guide