Scotland’s most southerly area, Dumfries and Galloway can sometimes be overlooked, but this beautiful area; with its breath-taking scenery of stunning Solway and Ayrshire coastlines, ancient woodlands and hills, is just waiting to be explored. 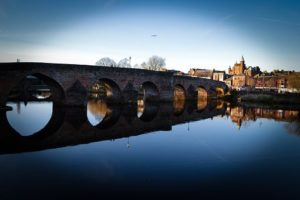 Enjoy a great day out at the Galloway Forest Park discovering forest trails and spectacular loch and mountain views, and as a Gold Tier Dark Sky Park, this is considered one of the best places to stargaze in Europe.

A region steeped in history, follow in the footsteps of Robert the Bruce with four fascinating trails centring on Dumfries or visit the medieval fortress of Caerlaverock Castle or Moat Brae – the inspiration for J.M. Barrie’s Peter Pan, recently opened as the National Centre for Children’s Literature and Storytelling.

Transport links via the A75 from Dumfries or the A77 from Ayr and Glasgow and ferries to and from Northern Ireland from Cairnryan make this area easily accessible.

The delightful villages of Portpatrick and Port Logan make an ideal base for the beautiful Rhins Peninsula and the most southerly point of Scotland, the dramatic Mull of Galloway – filming location for the recent movie ‘Keepers’ starring Gerard Butler and Peter Mullen.

Castle Douglas is the ‘foodie’ town of Dumfries and Galloway focusing on fabulous local produce. Kirkcudbright, a pretty harbour town, located on the banks of the River Dee, became a magnet for artists in the 19th century.

This is just a flavour of Dumfries and Galloway, there’s so much more….

For your accommodation needs, take a look at a selection of our superb B&Bs in the area:-