The Cotswolds – The English Coutryside At It’s Best! 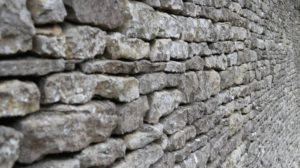 The Cotswolds are just such a beautiful area of the country,  picturesque villages, lovely dry stone walling, How do they do that ? it’s amazing that those walls stand the test of time, don’t you think – I do. Anyway here’s just a little treck through Gloucestershire

GLOUCESTERSHIRE – the Cotswolds and Bourton-on-the-Water, Moreton-in-Marsh, Stow-on-the-Water, Chipping Campden and the ‘capital of the Cotswolds’, Cirencester. The magnificent Gloucester Cathedral; Severnside Tewkesbury; Slimbridge’s Wildfowl and Wetlands Trust; Westonbirt Arboretum; the ancient Forest of Dean and its wild boar and deer; Berkeley Castle…and view the River Wye and the falcons from Symonds Yat Rock. 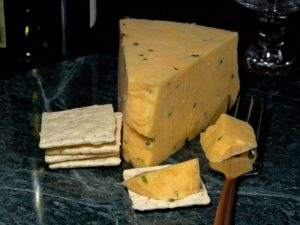 The Cotswolds  comprising the Cotswold Hills, a range of rolling hills that rise from the meadows of the upper Thames to an escarpment, known as the Cotswold Edge, above the Severn Valley and Evesham 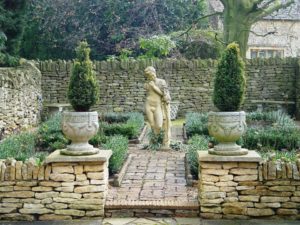 Vale. The area is defined by the bedrock of Jurassic limestone that creates a type of grassland habitat rare in the UK and that is quarried for the golden-coloured Cotswold stone.It contains unique features derived from the use of this mineral; the predominantly rural landscape contains stone-built villages, historical towns and stately homes and gardens. 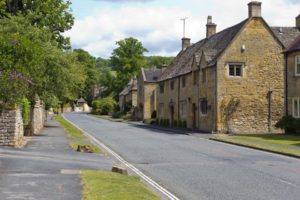 The Cotswolds covers 787 square miles and is the second largest protected landscape in England (second to the Lake District) stretching south-west from just south of Stratford-upon-Avon to just south of Bath.

It lies across the boundaries of several English counties; mainly Gloucestershire and Oxfordshire, and parts of Wiltshire, Somerset, Worcestershire and Warwickshire. 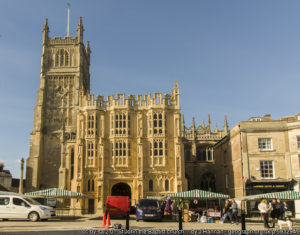 The Church of St. John the Baptist, Cirencester is renowned for its Perpendicular Gothic porch, fan vaults and merchants’ tombs.

The town also has a Roman Catholic Church dedicated to St Peter; the foundation stone was laid on 20 June 1895. Coxwell Street to the north of Market Square was the original home of the Baptist Church that was founded in 1651 – making it one of the oldest Baptist churches in England.

To the west of the town is Cirencester House, the seat of Earl Bathurst and the site of one of the finest landscape gardens in England, laid out by the first Earl Bathurst after 1714.

Accommodation in Cirencester ? look no further – 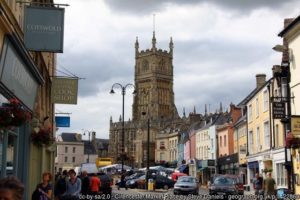 Abbey House, Cirencester was a country house built on the site of the former Cirencester Abbey following its dissolution and demolition at the English Reformation in the 1530s.

The site was granted in 1564 to Richard Master, physician to Queen Elizabeth I. The house was rebuilt and altered at several dates by the Master family, who still own the agricultural estate. By 1897 the house was let, and it remained in the occupation of tenants until shortly after the Second World War. It was finally demolished in 1964.

On Cotswold Avenue is the site of a Roman amphitheatre which, while buried, retains its shape in the earthen topography of the small park setting. Cirencester was one of the most substantial cities of Roman-era Britain.

Cirencester the largest town in the Cotswolds. It is the home of the Royal Agricultural University, the oldest agricultural college in the English-speaking world, founded in 1840.

The town’s Corinium Museum has an extensive Roman collection. The Roman name for the town was Corinium, which is thought to have been associated with the ancient British tribe of the Dobunni, having the same root word as the River Churn. 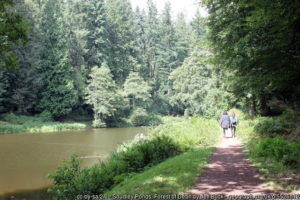 northwest, Herefordshire to the north, the River Severn to the south, and the City of Gloucester to the east. 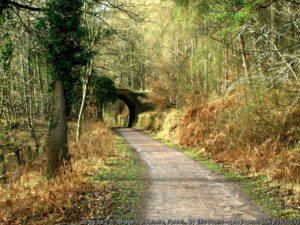 The area is characterised by more than 110 square kilometresof mixed woodland, one of the surviving ancient woodlands in England. A large area was reserved for royal hunting before 1066, and remained as the second largest crown forest in England, the largest being New Forest.

Although the name is used loosely to refer to the part of Gloucestershire between the Severn and Wye, the Forest of Dean proper has covered a much smaller area since the Middle Ages.

The Forest proper is within the civil parishes of West Dean, Lydbrook, Cinderford, Ruspidge, and Drybrook, together with a strip of land in the parish of English Bicknor.

Berkeley Castle BARK-lee; historically sometimes spelt Berkley Castle or Barkley Castle is a castle in the town of Berkeley, The castle’s origins date back to the 11th century, and it has been designated by English Heritage as a grade I listed building. 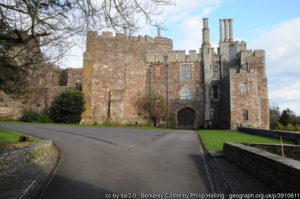 The castle has remained within the Berkeley family since they reconstructed it in the 12th century, except for a period of royal ownership by the Tudors. It is traditionally believed to have been the scene of the murder of King Edward II in 1327

The castle was used for many scenes for the 2003 television film of The Other Boleyn Girl. More recently the castle and grounds have been used for the external shots of the Valencian castle in Galavant.

The castle is featured in an episode of the 2017 season of the genealogy documentary television series Who Do You Think You Are? with American actress Courteney Cox looking into her ancestry. Cox learns that she is a 21-generation direct descendant of Thomas de Berkeley, 3rd Baron Berkeley and 22-generation descendant of de Berkeley’s father-in-law, Roger Mortimer, 1st Earl of March – also learning of their parts in the murder of King Edward II of England at Berkeley Castle in 1327. 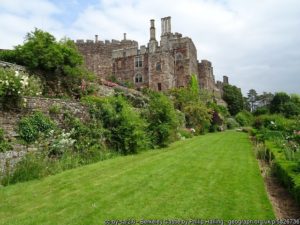 Two ships of the Royal Navy have been named Berkeley Castle after the castle,  as has a Great Western locomotive.

Tewkesbury is a market town. It lies in the far north of the county, forming part of the border with Worcestershire. 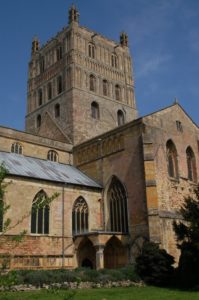 The name Tewkesbury comes from Theoc, the name of a Saxon who founded a hermitage there in the 7th century, and in the Old English language was called Theocsbury.

The Battle of Tewkesbury, which took place on 4 May 1471, was one of the decisive battles of the Wars of the Roses.

Tewkesbury claims Gloucestershire’s oldest public house, the Black Bear, dating from 1308, This date is disputed though, it has been  closed and for sale however the new owners  renovation plans are well advanced for it to re -open by the end of this year.Fancy a trip to

Other notable buildings are the Royal Hop Pole Hotel in Church Street (which has recently been converted into a part of the Weatherspoon’s pub chain with the discovery of a former medieval banqueting hall in the structure), mentioned in Charles Dickens’ The Pickwick Papers, the Bell Hotel, a large half-timbered structure opposite the Abbey gateway, and the House of the Nodding Gables in the High Street.

The Abbey Church of St Mary the Virgin, Tewkesbury, (commonly known as Tewkesbury Abbey see above), is a parish church and a former Benedictine monastery. It is one of the finest examples of Norman architecture in Britain, and has probably the largest Romanesque crossing tower in Europe.

Tewkesbury had been a centre for worship since the 7th century, becoming a priory in the 10th.

The present building was started in the early 12th century. It was unsuccessfully used as a sanctuary in the Wars of the Roses. After the Dissolution of the Monasteries it became the parish church for the town. George Gilbert Scott led Restoration in the late 19th century. The church and churchyard within the abbey precincts includes tombs and memorials to many of the aristocracy of the area.