The ONLY Way is ESSEX!!

Home » Bed & Breakfast News » Bed and Breakfast Blog » The ONLY Way is ESSEX!!

Yes we all know Essex has a reputation  which has been personified on various Tv shows over the years, but believe you me the county has a whole host of other things to offer the discerning  traveller with some truely tremendous history, an award winning zoo, fantastic coastline and so very much more, its best summed up here -Ancient forest, historic rivers and a great heritage.

But it’s also known for much more and for many as the breadbasket of England. Arable farming is big with swathes of wheat and barley blowing in the breeze in late summer before harvest.

In this post I just want to cover just a few of the real gems in Essex my home County, then in later posts I’ll go into more depth  and bring you more! 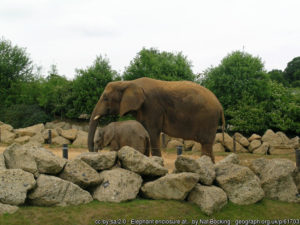 Let’s start in Colchester – the oldest recorded town in Britain. Its fascinating story is told in the town’s award-winning Castle Museum, housed in the Norman keep. There is also the world-renowned Colchester Zoo.

Colchester was the first Roman-founded city in Britain, and it lays claim to be regarded as Britain’s oldest recorded town and is believed to have been  for a time the capital of Roman Britain,

Camulodunum (as the Romans called it) 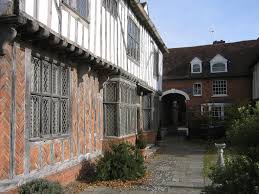 Soon after the Roman conquest of Britain in AD 43, a Roman legionary fortress was established at Colchester,  the first in Britain.

The city contained a large and elaborate Temple to the Divine Claudius, the largest classical-style temple in Britain, as well as at least seven other Romano-British temples.

Colchester is home to two of the five Roman theatres found in Britain; the example at Gosbecks (site of the Iron Age royal farmstead) is the largest in Britain, able to seat 5,000.

It served as a provincial Roman capital of Britain, but was attacked and destroyed during Boudica’s rebellion in AD 61. Sometime after the destruction, London became the capital of the province of Britannia.

Colchester Archaeological Trust discovered the remains of a Roman Circus (chariot race track) underneath the Garrison in Colchester, a unique find in Britain. 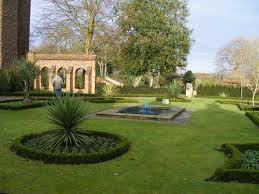 Medieval Colchester’s main landmark is Colchester Castle, which is an 11th-century Norman keep, and built on top of the vaults of the old Roman temple. There are notable medieval ruins in Colchester, including the surviving gateway of the Benedictine abbey of St John the Baptist (known locally as “St John’s Abbey”), and the ruins of the Augustinian priory of St Botolph (known locally as “St Botolph’s Priory”). Many of Colchester’s parish churches date from this period.

In 1189, Colchester was granted its first royal charter by King Richard I (Richard the Lionheart). It is believed the charter was granted at Dover with the king about to embark on one of his many journeys away from England.

When Audley End was built in 1614; it was the largest house in England.

Charles II made it a palace. Its magnificent parkland was crafted by Capability Brown. 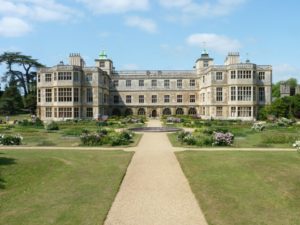 Is a largely early 17th-century country house outside Saffron Walden, It was once a prodigy house, a palace in all but name and renowned as one of the finest Jacobean houses in England.

Now a third of its original size, but is still large, with much to enjoy in its architectural features and varied collections.

The house shares some similarities with Hatfield House, except that it is stone-clad as opposed to brick and long remained the family seat of the Barons Braybrooke. 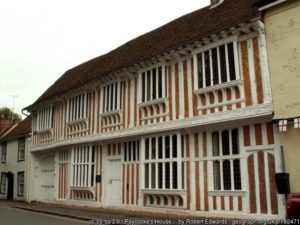 To the ‘lace town’ of Coggeshall, where Grange Barn and Paycocke’s House are two of the most important medieval and Tudor buildings in the country. At Layer Marney, admire the 80 feet high Tudor tower and gatehouse. 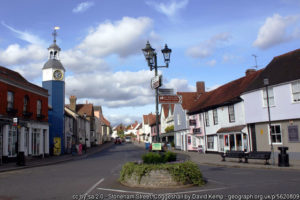 Coggeshall. Although Coggeshall has a market and is a market town, the vast majority of the residents, some of whom are third or fourth generation Coggeshall, insist on referring to it as a village.

It is known for its almost 300 listed buildings and formerly extensive antique trade. Many local businesses, such as the White Hart Hotel and the Chapel Inn, have been established for hundreds of years (the Chapel Inn became a legally licensed premises in 1554). A market has been run every week on Market Hill since 1256, when a charter to do so was granted by Henry III.

Coggeshall is mentioned in the Domesday Book as Cogheshal. The Manor of Coggeshall was owned by a Saxon freeman named Cogga, and at the time of its entry there was “a mill; about 60 men with ploughs and horses, oxen and sheep; woodland with swine and a swineherd, four stocks of bees and one priest”. William the Conqueror gave the Manor to Eustace, the Count of Boulogne.

Essex has some great gardens. Beth Chatto Garden proves gardens can be established anywhere, Hyde Hall has crowned a windswept hill and Easton Lodge is a wonderful work of restoration.

Essex has a noble maritime heritage. Wooden warships were built at Harwich and Maldon and Brightlingsea were home to fleets of sailing merchant and fishing craft. Many still sail. 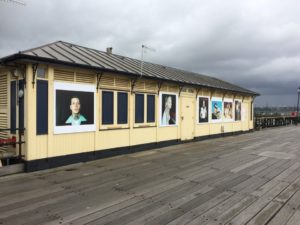 I you’re feeling fit take a stroll along Southend Pier – at more than 1¼ miles, the longest pleasure pier in the world. If not, there’s a train to help you out.

Sir John Betjeman once said that “the Pier is Southend, Southend is the Pier” the pier is a Grade II listed building.

How it came about

In the early 19th century, Southend was growing as a seaside holiday resort. At the time, it was thought that spending time by the sea was good for one’s health, and since it was close to the capital, many Londoners would come to Southend for this reason. However the coast at Southend consists of large mudflats, so the sea is never very deep even at full tide – between 13 and 20 feet – and recedes over one mile (1.6 km) from the beach at low tide. Large boats were unable to stop at Southend near to the beach and no boats at all were able to stop at low tide. This meant that many potential visitors would go past Southend and on to Margate, or other resorts where docking facilities were better.

To counter this trend local dignitaries pushed for a pier to be built. This would allow boats to reach Southend at all tides.

On 14 May 1829 the first Pier Act received the Royal Assent. On 25 July the Lord Mayor of London Sir William Thompson laid the foundation stone of the first section of the pier. By June 1830 a 600-foot (180 m) wooden pier was opened, based on oak piles. However this was still too short to be usable at low tide, so by 1833 it had been extended to three times its length and by 1848 was the longest pier in Europe at 7,000 feet

So that’s it for this post, but if you would like regular updates then please join our Newsletter

Or call us we’ve been advising clients for over 33 years all about the best B&B accommodation here in theUK so we think we know a little bit about short break holidays. 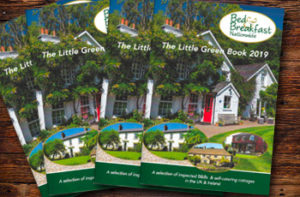