Truro used to have a castle

Hi & Welcome back, if you like your history then read on – and yes Truro did have a castle but sadly no more, here’s the story ……………

However the main records and archaeological findings of a permanent settlement in the Truro date from Norman Times. A castle was built there in the 12th century by, Richard De Luci Chief Justice of England in the reign of, Henry II who for his services to the court was granted land in Cornwall, including the area surrounding the confluence of the two rivers. The town grew in the shadow of the castle and was awarded borough status to further economic activity.

There are very few remains left of the 12th-century structure as the land where it would have proudly stood was used as a cattle market and crown court of justice during the centuries after. 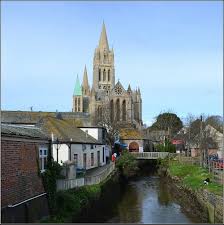 Richard de Lucy fought in Cornwall under Count Alan of Brittany after leaving Falaise late in 1138.

The small Adulterine Castle at Truro, later known as “Castellum de Guelon” was probably built by him in 1139–1140. He styled himself “Richard de Lucy, de Trivereu”.

The castle later passed to Reginald FitzRoy (also known as Reginald de Dunstanville), an illegitimate son of Henry I, when he was invested by King Stephen as the first Earl of Cornwall. Reginald married Mabel FitzRichard, daughter of William FitzRichard, a substantial landholder in Cornwall.

The 75-foot -diameter castle was in ruins by 1270 and the motte was levelled in 1840. Today  Truro’s Crown Court stands on the site. In a charter of about 1170, Reginald FitzRoy confirmed to the burgesses of Truro the privileges granted by Richard de Lucy. Richard held ten Knight’s fees in Cornwall prior to 1135 and at his death the county still accounted for a third of his considerable total holdingr

By the start of the 14th century Truro was an important port, due to its inland location away from invaders, prosperity from the fishing industry, and a new role as one of Cornwall’s   Stannary Towns for assaying and stamping tin and copper from Cornish mines. 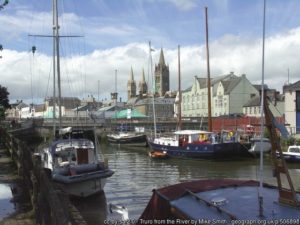 Unfortunately The Black Death   brought a trade recession and many of the population left the town which fell into a neglected state.

However Trade gradually returned and the town regained prosperity during Tudor times.