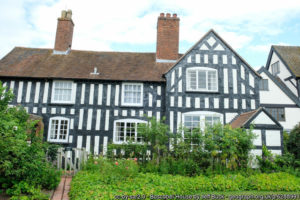 Boscobel House and its Royal Oak tree became famous as hiding places of King Charles II after defeat at the Battle of Worcester in 1651. After Charles’s visit Boscobel remained a working farm, and today you can visit the lodge, farmyard, gardens and a descendant of The Royal Oak. White Ladies Priory, another of Charles’s hiding places, is a short walk away.

Following the execution of King Charles I in 1649, his eldest son made a brave though misguided attempt to regain the throne. In 1651 his hopes were crushed at Worcester in the final conflict of the Civil War. Young Charles was forced to flee for his life. Initially the future King Charles II set out to cross the River Severn into Wales, but found his way blocked by Cromwell’s patrols. He sought refuge instead at Boscobel, hiding first in a tree, which is now known as The Royal Oak.

The oak you see today is a descendant of the tree where Charles hid, and beside it, is a replacement grown from an acorn of the oak, which was planted by the Prince of Wales in 2001, on the 350th anniversary of Charles’s visit.

Built in about 1632, Boscobel House, originally a timber-framed farmhouse, was converted into a hunting lodge by John Giffard of Whiteladies. The Giffard family were Roman Catholics, at a time when the religion suffered persecution, and tradition holds that the true purpose of Boscobel was to serve as a secret place for the shelter of Catholics in times of need.

At three o’clock in the morning of 4 September 1651, a party of 60 Royalist soldiers rode quietly up to the gates of an old converted priory, White Ladies, on the northern border of Shropshire.

It was dark, and they had passed unnoticed through 40 miles of countryside. Among them was a wanted man: the 21-year-old son of Charles I, and newly crowned King of Scotland.

A few hours earlier the Royalist army had been decisively defeated at the Battle of Worcester, where 5,000 of its troops had been killed or captured. The man who would be Charles II and some of his men had escaped, and now required urgent refuge.

At White Ladies, the king’s coat and breeches were removed and he was dressed in country clothes: green breeches, a leather doublet, a coarse hemp shirt and an old grey hat. Shears were produced and the long, dark royal locks cropped short.

The other troops left and Richard Penderel, the eldest of five brothers summoned to the house, led Charles out to a wood. Together they planned an escape – over the river Severn, into Wales and from there to France.

As soon as it was dark Charles and Richard set out on foot. They reached the outskirts of a town called Madeley, but found the Severn heavily guarded. Exhausted, hungry and soaked through from wading across a river, they were forced to turn back. This time they headed for Boscobel House, a mile from White Ladies. 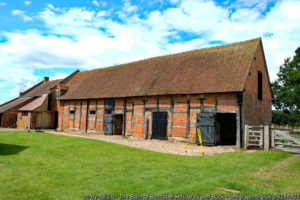 Built by the Giffard family about 30 years earlier, and buried in thick woodland, Boscobel was even more remote than White Ladies. Indeed, it had been designed for privacy. Like many other houses belonging to Catholics persecuted during the late 16th and early 17th centuries, it had hiding places for Catholic priests.

The king was brought into Boscobel’s parlour by William and Joan Penderel. Charles’s wet stockings and ill-fitting shoes were set by the fire to dry and he was given bread, cheese and ‘small beer’. But Parliamentarian soldiers had already raided White Ladies, and Charles and his friends knew that not even Boscobel was safe.

Charles consulted with William Careless, another fugitive staying at the house. The king’s account, dictated 30 years later to Samuel Pepys, records their decision:

“he told me that it would be very dangerous either to stay in the house or go into the wood (there being a great wood hard by Boscobel) and he knew but one way how to pass all the next day and that was to get up into a great oak in a pretty plain place where we could see round about us for they would certainly search all the wood for people that had made their escape. … We got up into a great oak that had been lopped some 3 or 4 years before and so was grown out very bushy and thick not to be seen through. And there we sat all the day.”

At White Ladies the pursuing soldiers had been confident of having their man ‘within a day or two’, and as Charles and Careless sheltered in the oak, Cromwell’s troops drew close.

The soldiers left and at dusk Charles and Careless returned to the house. They ate more heartily, and Charles was left to rest for the night in a priest-hole in the attic. The next day, the Penderel brothers escorted the king secretly away.

Charles endured a further six weeks on the run. Then on 15 October 1651, he embarked from Shoreham beach on a ship bound for the Isle of Wight. The captain turned her south, and landed the king at Fécamp, from where he travelled to Rouen, and thence to Paris and the French court. It was to be nine long years until, with Cromwell dead, he could return to reclaim the throne in 1660.

Charles II is believed to have slept in this priest-hole on the night of 6 September 1651. 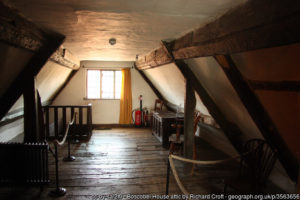 You can see the priest-hole where Charles spent the night of 6 September 1651 in the attic of the lodge, there is also a second priest-hole built into a chimney stack off the Squire’s Room, which was originally the escape route down to the garden.

Boscobel’s farmyard is a well-preserved example of a 19th-century small ‘planned farm’. Quiet and peaceful today, it would have once been a busy, working farm.

See the range of Victorian farm machinery; discover the smithy, stables, cowhouse and dairy – and say hello to the chickens which freely roam the yard.

Enjoy spectacular views over the fields on the two-mile round walk to the ruins of White Ladies Priory, the late 12th-century church where Charles II hid before moving to Boscobel House.

Boscobel’s garden is typical of the type which would have been at the house in the 17th-century, with rectangular parterre beds, native honeysuckle and old species of lavender, box and santolina.

Don’t miss the small mound, on top of which was a “pretty arbour” where Charles is said to have spent a few hours reading in 1651.

Get hands-on with history in the family room, try on armour, dress as a Roundhead or Cavalier and get creative at the art table. In the warmer months, enjoy family fun with Victorian games in the garden.

Visit the tearoom situated in the stables, serving breakfast including full English, pancakes and smoothies and lunches including soup, sandwiches, salads and hot meals, puddings, cakes and scones. Created in a vintage 1940s theme, a break here is the perfect way to relax and enjoy a nostalgic look to back to England’s finest hour.