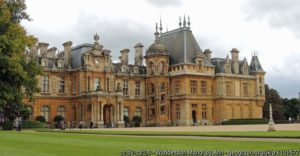 between 1874 and 1889 for Baron Ferdinand de Rothschild as a weekend residence for grand entertaining and as a setting for his collection.

The last member of the Rothschild family to own Waddesdon was James de Rothschild. He bequeathed the house and its contents to the National Trust.

It is now managed by the Rothschild Foundation chaired by Jacob Rothschild, 4th Baron Rothschild. It is one of the National Trust’s most visited properties, with a massive footfall of visitors every year.

Spectacular Wine Cellars – not to be missed! 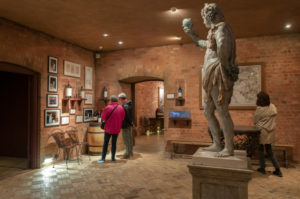 The Wine Cellars at Waddeston Manor

The Wine Cellars in the Manor were created during the Centenary Restoration and opened in 1994. They are modelled on the private cellars at Château Lafite Rothschild.

More than 15,000 bottles are stored in the Cellars, some 150 years old, the majority from the Château Lafite Rothschild and Château Mouton Rothschild estates.

It is the largest private collection of Rothschild wines in the world.

The cellars contain bottles with wine labels designed by artists such as Salvador Dali and Andy Warhol.

Rarely can one view an art collection of such magnitude, splendour and value as the collection at Waddesdon – it really is a feast for your eyes to see such exquisite creations in such a superb environment

The interior of Waddesdon Manor was photographed in 1897 for Baron Ferdinand’s privately published “The Red Book”. Who has a book published privately – that’s really something!

Multiple films have been shot at Waddesdon Manor, to name a few:

The Queen (2006), in which interiors and the gardens doubled for Buckingham Palace

Sherlock Holmes: A Game of Shadows (2011); Our Kind of Traitor (2016); and just too many more to list. It’s also been used for numerous TV series as well.

Other visitor attractions in Buckinghamshire include the Roald Dahl Children’s Gallery; Bletchley Park – the codebreakers’ home, Station X; Chenies Manor House; the gardens and woodlands of Cliveden – it really is a county just waiting to be discovered.

Bletchley Park is a 19th-century mansion and estate near Milton Keynes in Buckinghamshire, 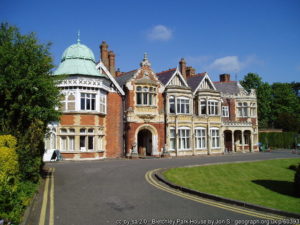 constructed around 1883 for the English financier and politician Sir Herbert Samuel Leon in the Victorian Gothic, Tudor, and Dutch Baroque styles, on the site of older buildings of the same name.

It has received latter-day fame as the central site for British (and subsequently, allied) codebreakers during World War II, although at the time of their operation this fact was a closely guarded secret. 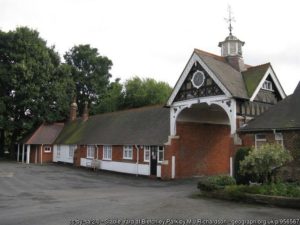 A stable block at Bletchley

During the Second World War, the estate housed the British Government Code and Cypher School (GC&CS), which regularly penetrated the secret communications of the Axis Powers – most importantly the German Enigma and Lorenz ciphers; among its most notable early personnel the GC&CS team of codebreakers included Alan Turing, Gordon Welchman, Hugh Alexander and Stuart Milner-Barry.

According to the official historian of British Intelligence, the “Ultra” intelligence produced at Bletchley shortened the war by two to four years, and without it the outcome of the war would have been uncertain.

The team at Bletchley Park devised automatic machinery to help with decryption, culminating in the development of Colossus, the world’s first programmable digital electronic computer.

Codebreaking operations at Bletchley Park came ended in 1946 and all information about the wartime operations was classified for many years. After the war, the Post Office took over the site and used it as a management school. The Bletchley Park Trust was formed in 1991 to save large portions of the site from developers.

More recently, Bletchley Park has been open to the public and houses interpretive exhibits and rebuilt huts as they would have appeared during their wartime operations, as well as The National Museum of Computing, established on the site which includes a rebuilt Colossus machine, and receives hundreds of thousands of visitors annually.

Even more to discover in Buckinghamshire 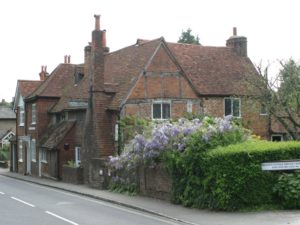 Milton’s Cottage is a timber-framed 16th-century building in the Buckinghamshire village of Chalfont St Giles. It is open to the public as a writer’s house museum.

In 1665 Milton and his wife moved into the cottage to escape the Plague in London.

Milton’s  spent less than a year at the Grade I listed 16th-century cottage, however he completed his best known work, Paradise Lost; and  the seeds for Paradise Regained were also sown here.

The ground floor of the cottage is now a museum dedicated to Milton and his works. The four museum rooms contain the most extensive collection in the world on open display of 17th-century first editions of John Milton’s works, both poetry and prose.

Have a Tour which vividly describes and explores the extraordinary career of this blind genius in his refuge from the plague, where he wrote some of the finest poetry.

The cottage’s garden is also open to the public and is planted in a traditional style.

Buckinghamshire has several major towns. Include the county town of Aylesbury, Marlow in the south near the Thames and Princes Risborough in north

The southern part of the county is dominated by the Chiltern Hills.

A large part of the Chiltern Hills, an Area of Outstanding Natural Beauty, runs through the south of the county and attracts many walkers and cyclists. 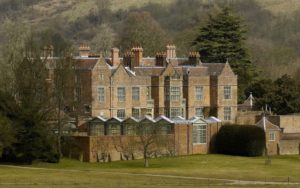 In this area older buildings are often made from local flint and red brick. Chequers, the country retreat of the incumbent Prime Minister is in Buckinghamshire.