Cambridge has been an important settlement since before Roman times. In the 11th century, religious orders and a breakaway group of Oxford scholars established Cambridge University. Its jewel is King’s College. Founded in 1441 by Henry VI, it features a stunning fan vaulted ceiling and a Rubens altarpiece.

The University of Cambridge was founded in 1209. The buildings of the university include King’s College Chapel, Cavendish Laboratory, and the Cambridge University Library, one of the largest legal deposit libraries in the world. 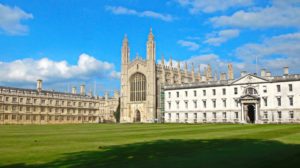 The city’s skyline is dominated by several college buildings, along with the spire of the Our Lady and the English Martyrs Church, and the chimney of Addenbrooke’s Hospital. Anglia Ruskin University, which evolved from the Cambridge School of Art and the Cambridgeshire College of Arts and Technology, also has its main campus in the city.

Cambridge Today and for the Future

Cambridge is at the heart of the high-technology Silicon Fen area as it is called with industries such as software and bio science and many start-up companies born out of the university. 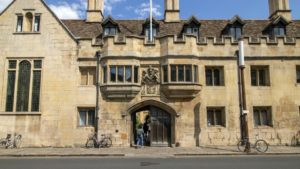 In 1349 Cambridge was affected by the Black Death. Few records survive but 16 of 40 scholars at King’s Hall died. The town north of the river was severely affected being almost wiped out.

Following further depopulation after a second national epidemic in 1361, a letter from the Bishop of Ely suggested that two parishes in Cambridge be merged as there were not enough people to fill even one church.

With more than a third of English clergy dying in the Black Death, four new colleges were established at the university over the following years to train new clergymen, namely Gonville Hall, Trinity Hall, Corpus Christi and Clare.

Following repeated outbreaks of pestilence throughout the 16th Century, sanitation and fresh water were brought to Cambridge by the construction of Hobson’s Conduit in the early 1600s. Water was brought from Nine Wells, at the foot of the Gog Magog Hills, into the centre of the town 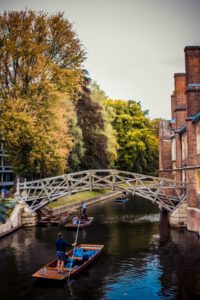 In 1382 a revised town charter affects a “diminution of the liberties that the community had enjoyed”, due to Cambridge’s participation in the Peasants’ Revolt.

The charter transfers supervision of baking and brewing, weights and measures, amongst other things from the town to the university. 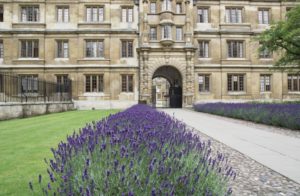 Cambridge –Forged by the History of War

King’s College Chapel was begun in 1446 by King Henry VI. The chapel was built in phases by a succession of kings of England from 1446 to 1515, its history intertwined with the Wars of the Roses, and completed during the reign of King Henry VIII

The building would become synonymous with Cambridge, and currently is used in the logo for the City Council.

Cambridge played a significant role in the early part of the English Civil War as it was the headquarters of the Eastern Counties Association, an organisation administering a regional East Anglian army, which became the mainstay of the Parliamentarian military effort before the formation of the New Model Army.

Cambridgeshire’s most famous son, Oliver Cromwell, was born in Huntingdon. His death mask can be seen at the town’s Cromwell Museum.

In 1643 control of the town was given by Parliament to Oliver Cromwell, who had been educated at Sidney Sussex College. The town’s castle was fortified and garrisoned with troops and some bridges were destroyed to aid its defence. Although Royalist forces came within 2 miles of the town in 1644, the defences were never used and the garrison was stood down the following year. 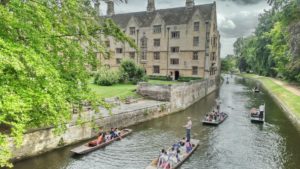 A good place to view some of the colleges and the bridges is from the Cam, aboard one of the famous punts. The Fitzwilliam Museum has a world-renowned collection of antiquities and fine art.

The Cambridge University Gardens are spectacular.

Moving into the countryside now ………..

to The Fens, a vast tract of fertile drained swampland. Dominating the area is Ely Cathedral. It was founded in 1109 and boasts The Octagon – an amazing architectural feat. Wicken Fen is 600 acres of classic undrained fen and a wildlife wonderland. Visit also Holme Fen and Wood walton Fen Nature Reserves.

Visit the Biggest 18th Century House in the County

Anglesey Abbey is a fine Jacobean country house built on the site of a 12th century abbey. It has a working watermill and wildlife gardens. Elton Hall has a medieval chapel and gatehouse. Its library includes Henry VIII’s prayer book. Wimpole Hall and Home Farm is the biggest 18th century house in Cambridgeshire.