Dalemain House and Gardens: Just two miles from Ullswater, these gardens are a haven of tranquillity 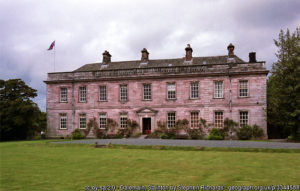 The History of Dalemain

Dalemain is one of the most beautiful and impressive stately houses in the North West of England. The finely dressed pink stone of its Georgian façade glows magnificently in the sunlight. Yet hidden behind the ordered geometry of its Palladian architecture is the story of its past.

A Journey Through the ages

The name Dalemain means ‘manor in the valley’, and there has been a settlement in its position since the time of the Saxons.The first recorded mention of a building on this site, is of a fortified pele tower in the reign of Henry II; one of a line of towers built to protect the country against the marauding and barbaric ‘border reiver’ Scots to the North.

In the 14th Century

In the 14th century a manor hall was added with a second tower, and during the 16th century two wings housing kitchen and living quarters were built, one on each side of the main building.

These various building works provide a glorious confusion of winding passages, quaint stairways and unexpected rooms in the house that stands today; the Fretwork Room particularly has a magnificent sixteenth-century plaster ceiling and beautiful oak panelling.

In 1679, Sir Edward Hasell bought Dalemain thanks to a legacy from his employer Lady Anne Clifford.

Sir Edward acted as ‘Chief Officer’ to Lady Anne Clifford until her death in 1676. As thanks, he was given various gifts from Lady Anne, including her portrait by Bracken and her Diary of 1676 both of which are on show. Sir Edward Hasell bought Dalemain from the Layton family, and it has remained in his family ever since. 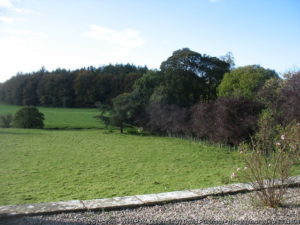 Although he made minor changes to the building it was not until later when his son, Edward, built an impressive Georgian front in 1744. This enclosed a central courtyard between the new and the old parts of the house and the house became much grander with public rooms including the breath-taking Chinese Room with its original eighteenth-century, hand-painted wallpaper, riotously alive with birds, insects and flowers.

The Georgian facade is the first view of Dalemain for most visitors, an impressive sight from the road, before the courtyard and medieval structures comes into view.

Modernisation in the 1920’s

There have been no major alterations since 1744 and the interior has thus gradually developed slowly. In 1920 much of the house was modernised by Gertrude Hasell, wife of Major Hasell, who introduced electricity, central heating and redecorated many of the rooms.

The house was opened to the public in 1977 but remains very much lived in by the Hasell-McCosh family where rooms are used throughout the year. There are interesting collections of fine furniture, family portraits, ceramics, dolls’ houses, and old toys.

An Interesting Fact about Dalemain:

It is home to Mrs Mouse, Dalemain’s smallest resident. See if you can spot her house on the stairs at Dalemain, and keep an eye out for more signs of her throughout the house.

The Great Barn, situated in the courtyard at Dalemain, was built in the 1500s and is one of the largest and most impressive loft barns in the north of England. The roof height was raised in 1685 by order of Sir Edward Hasell. 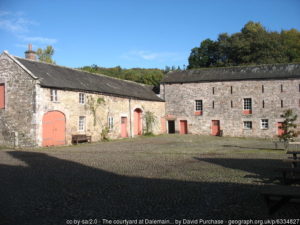 The barn, which has a monastic feel, now houses the agricultural and fell pony museum on the upper floor. It is stuffed full of the most extraordinary range of things seldom seen nowadays but which bring back nostalgic memories of past-times.

This museum is home to an exceptional collection of agricultural implements which have only become outdated through the mechanisation of the last seventy years. It is full of various equipment, from carts and ploughs to hand tools and bric-a-brac of a bygone country life.

Sylvia McCosh, mother of current owner Robert Hasell-McCosh, bred Fell Ponies including many prize winners and exported stallions to both Canada and Pakistan. The Fell Pony museum is therefore a beautiful collection that includes some of her prizes, as well as harnesses, tack and a blacksmith’s workshop.

The exhibition has been put together with the support of the Fell Pony Society, who host their Stallion Show and Fell Pony Breed Show at Dalemain every year. For more information visit: www.fellponysociety.org.uk. 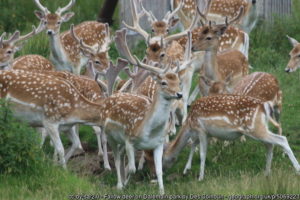 With beautiful hand painted murals of the ponies and show cases full of artefacts, make sure you do not miss this worthwhile collection telling something of the Lake District traditional breed which have their origins in the hardy, black ponies of Romano Britain.

If you would like to find out more about this unique museum, the museum is free to enter for visitors to Dalemain and is a fascinating place to visit for young and old alike.

Jimmy, the retired gamekeeper is famous as the ‘Bird Man of Dalemain.’ If he’s in the courtyard when you visit, not only will you be able to watch the songbirds feeding from his hands, but he might even encourage them to feed from yours!

It’s the centre of the world for Marmalade. Jane Hasell-McCosh founded the World’s Original Marmalade Awards to celebrate her love for this orange preserve 12 years ago, and since then it has spread beyond her wildest imaginings, with entries all over the world including Japan, Australia, South Korea, India and the Czech Republic.

Visitors to Dalemain’s shop can taste a selection of marmalades that have been officially named the finest in the world, as well as Dalemain’s own range, which includes a 17th century recipe from the Dalemain archives.

There is a sleeping giant in the low garden – make sure you don’t wake her up! And while you’re down there, make sure you’re not eaten by the (topiary) Dragon! 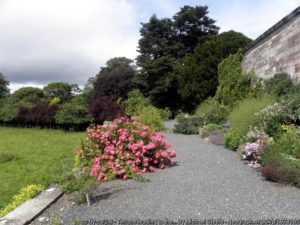 The gardens are home to the Dalemain Meconopsis Grandis, the famous Himalayan Blue Poppy. This strain is particular to Dalemain and visitors in May – July can see them in all of their glory, with cuttings available for those who simply can’t bear to leave them behind.

Eva Hasell of Dalemain ran the Canadian Caravan Mission in the 1920s, travelling from Newfoundland to Alaska to reach farmsteads inaccessible to Motor vehicles.

Visit Dalemain to see photos and first hand accounts of the extreme conditions and adventures she faced with her band of female volunteers.

There is a priest’s hiding hole, used when the house belonged to the Layton family, who were staunch Catholics. Not discovered until the 19th century, it would have been a very uncomfortable place to hide! Can you spot it?

It has been the family home of the Hasells since 1679 – eleven generations!

They have lived at Dalemain during the Glorious Revolution, the formation of the Kingdom of Great Britain, the Napoleonic Wars, the Industrial Revolution and both World Wars. Come and visit for a unique look into British History through the eyes of one family in what is still their beloved home.

Their scones are made to a secret recipe, and are famously delicious – not least when served with award winning marmalade in our Mediaeval Hall Tearoom.

The Chinese Room is decorated with sheets of hand-painted wallpaper, brought in Tea Clippers from China in 1757. If you look closely, you can see that individual animals, birds, insects and figures have been added to create a unique pattern throughout the room. Can you spot them all?

Put simply it’s a must visit destination, don’t miss out