Visit The very Heart of The Royal Navy – Portsmouth 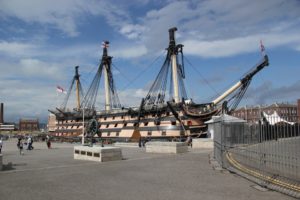 Portsmouth, the home of the Royal Navy. Nelson’s HMS Victory and Henry VIII’s Mary Rose feature in the city’s historic dockyard, all in the shadow of the 557 feet high Spinnaker Tower.

There is more maritime history at Southampton, the base for some of the world’s greatest ocean liners.

Portsmouth’s history can be traced back to Roman times. A significant naval port for centuries, Portsmouth has the world’s oldest dry dock. 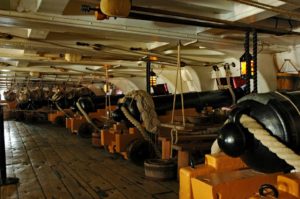 Cannon Balls would have made a mess!

In the sixteenth century Portsmouth was England’s first line of defence during the French invasion of 1545.

By the early nineteenth century, the world’s first mass production line was set up in Portsmouth Dockyard’s Block Mills, making it the most industrialised site in the world and birthplace of the Industrial Revolution.

Portsmouth was also the most heavily fortified town in the world, and was considered “the world’s greatest naval port” at the height of the British Empire

Defences known as the Palmerston Forts were built around Portsmouth in 1859 in anticipation of another invasion from continental Europe. 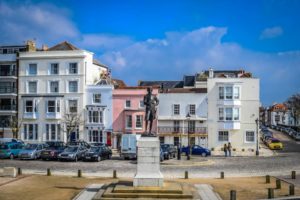 In 1926, Portsmouth was officially elevated in status from a town to a city. The motto “Heaven’s Light Our Guide”, a reference to the city’s eight-pointed star and crescent moon emblem, was registered to the City of Portsmouth in 1929.

During the Second World War, the city of Portsmouth was bombed extensively in the Portsmouth Blitz,

Her Majesty’s Yacht Britannia left the city to oversee the transfer of Hong Kong in 1997, which marked for many the end of the empire. In 1997.

Other sites to see in Portsmouth 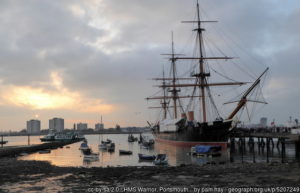 The city is home to some famous ships, including HMS Warrior, the Tudor carrack Mary Rose and Horatio Nelson’s flagship, HMS Victory (the world’s oldest naval ship still in commission). The former HMS Vernon naval shore establishment has been redeveloped as a retail park known as Gun wharf Quays. Portsmouth is among the few British cities with two cathedrals: the Anglican Cathedral of St Thomas and the Roman Catholic Cathedral of St John the Evangelist.

The waterfront and Portsmouth Harbour are dominated by the Spinnaker Tower, one of the United Kingdom’s tallest structures at 560 feet.

It’s A terrfic city to visit especially if you are into your maritime history – really do make the effort, you’ll be pleased you did 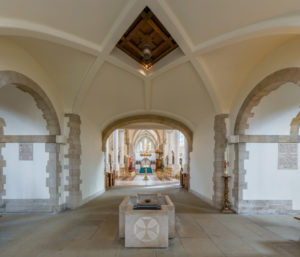 The Interior of Portsmouth Cathredral 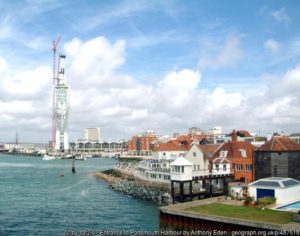