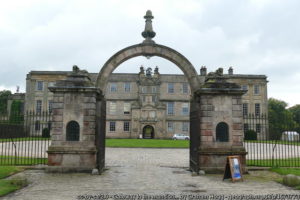 It’s a Glorious house, surrounded by gardens, moorland and deer park and really deserves an extended visit to fully appreciate this gem.

Welcome to Lyme. Nestling on the edge of the Peak District, Lyme was once home to the Legh family and, in its heyday a great sporting estate.

Step back in time to the Regency era

The 1,400 acre estate with its medieval herd of red deer offers fantastic walks and stunning views.

For a more tranquil walk explore the elegant Rose Garden, Ravine Garden or the luxurious herbaceous borders next to the reflecting lake where a certain Mr Darcy met Miss Bennet in the BBC production of ‘Pride and Prejudice’.

Children can let off steam in Crow Wood Playscape with its giant slide, badger den and rope walks, whilst the nearby Timber yard Cafe offers delicious hot and cold snacks, soups and range of cakes. 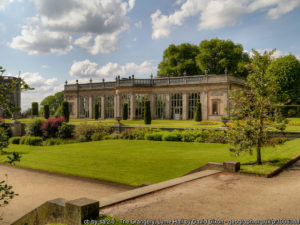 The Sarum Missal at Lyme is the only surviving, largely intact, book of its kind. Printed by William Caxton in Paris 1487, the book is unique in having belonged to one family for over five centuries and represents the changing religious views of the country during that period.

The book was in the Legh family’s possession from at least 1508 until the National Trust purchased it in 2008. The Missal has been on display ever since.

What is the Sarum Missal?

Handwritten copies of the Sarum Missal were commonplace in early modern England. A copy exists at Lyme.

The text of the Mass was broken up into sections, each major book opening with an illuminated letter and individual verses with a blue coloured letter.

The body of the Mass was written in different coloured inks, fonts and sizes. Priests could then use this to navigate through the sections, without which the text would lose much of its meaning.

The very First to be Bound and printed

The version on display at Lyme, however, was the first copy to be printed. It was produced in 1487 by William Caxton in conjunction with the printer Guillame Maynyal in Paris.

The Lyme Missal also shows the reaction to the Reformation in Catholic Cheshire. Henry VIII’s edict in 1538 requested the obliteration of references to the Pope, the Church of Rome and the Catholic cult of St. Thomas from all liturgical books. A lot can be guessed about the family from how they chose to censor their Missal.

Another important historical aspect of the volume is the rare survival of part of its original binding. Of the 60 Caxton books in the John Rylands Library, only two have parts of their original binding surviving. Many of these books were rebound in the 19th century.

Who was William Caxton? 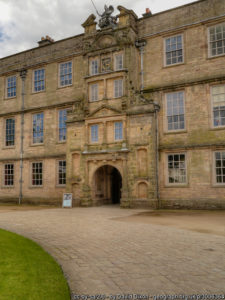 He was an apprentice in Cologne where he learnt his trade, setting up his first press in Bruges 1475, where he issued six books. In 1476 he returned to England and founded the country’s first printing press.

From this press he issued several liturgical books, making connections with Catholic institutions. But, when it came to printing the Missal, Caxton didn’t have the skills needed to print in different colours, fonts and sizes.

He travelled abroad to team up with Guillaume Maynyal in Paris, who perfected the two-pull, two-colour printing technique. The Sarum Missal was the first book to be printed this way.

What’s its connection to Lyme?

Sir Piers Legh V, both a knight and a priest, bought the book and most probably used it to officiate services. It then lay forgotten and dormant after the Reformation until it was rediscovered by Peter Legh XII.

He repaired the book in the 18th century only for it to disappear again. In the 1870s it was then given pride of place in Lyme’s Library until leaving with the family in 1946.

Discover a house with six centuries of history

Originally a hunting lodge and later transformed into a comfortable family home, Lyme has undergone extensive alterations since the 1400s. Notable architects were employed to transform the house into the magnificent mansion you see today.

Must see rooms in the house 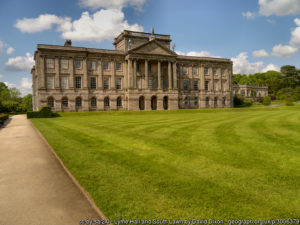 Like many great houses, Lyme was built and rebuilt, embellished and enlarged throughout its ownership by the Leghs, with each generation making its mark and creating the house we see today.

Of all the rooms at Lyme, this is the best preserved of the older Elizabethan house, dating from around 1580. Medieval stained glass sits in the window, while the heavy over mantel which bear’s Elizabeth I’s coat of arms reaches almost up to the ceiling.

Dark oak panels rise from the floor making a very contrasting space to the classical proportions of the Entrance Hall it overlooks.

The Stag Parlour is a small room that played a big part in Legh family history. Whilst updated throughout the years, some original details remain, including parts of the over mantel.

There are four 19th-century chairs that bear the monogram – ‘CR’ – of Charles I, said to be upholstered with fabric taken from the cloak worn by Charles I on the scaffold.

When James II was ousted from the throne in 1688, Peter Legh XII persistently refused to pledge his allegiance to the new monarchs, William and Mary.

He and other local land owners formed the Cheshire Club to discuss re-instating the Stuart king. Its first meeting was held in this room.

Family tradition has it that Mary Queen of Scots slept here, and that a secret passageway led from the cupboard, through the house and under the hill to the Cage. During one of the mansion’s many renovations, a skeleton was discovered lying in a cavity beneath the floorboards; the room was subsequently said to be haunted. 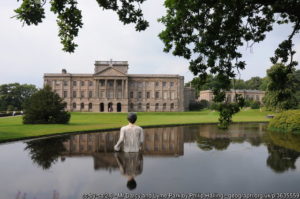 This space is another Elizabethan survivor, created for gentle exercise and for a display of wealth. Here at Lyme, the Long Gallery was also a domestic space. Records show that Sir Piers VII sat in one of the bays when paying his staff, and by the 17th century a billiard table stood at the top end. Later, the 2nd Lady Newton turned the room into a theatre, where the family staged performances, whilst also distributing Christmas presents to the children of the estate workers. During the Second World War, it became a nursery for evacuees.

Often a favourite for visitors, the Library today is a re-creation of how the room was decorated in the Victorian era. As restoration work to the room began in 2010, discovered beneath the modern wallpaper a shadow impression on the plaster of the original 19th-century paper as well as fragments of the crimson and gold flock were also found behind the bookcases, which enabled the restorers to create a historically accurate replacement.

Unlike many rooms, The Library is rope-free, a room where visitors are encouraged to take a seat and enjoy the room, rather than simply look at it. Inspired by this black and white photograph of 2nd Lord Newton stood by the fireplace, with a friend whose muddy feet hang over the end of the couch, showed the Library was a lived in space rather than a showroom.

Lyme is remarkable for having been owned by the same family, the Leghs, for just under 600 years.

Lyme has a large collection ranging from treasured Mortlake tapestries to collars belonging to the family’s beloved mastiff dogs. The house is home to the finest clock collection in the National Trust as well as one of the most important printed book in the Trust’s vast collection, The Lyme Sarum Missal.

Structures were built at strategic spots around the park to draw the eye across the landscape, here’s just a brief outline of the key ones. 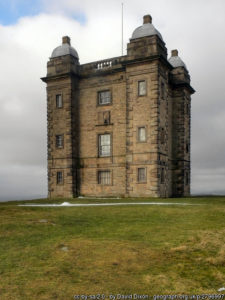 An iconic view at Lyme, the original Cage was built by the warrior priest, Sir Piers V, in 1524. It was used either as a hunting lodge or a watchtower, though its name reportedly comes from its use in the 17th century as a holding prison for poachers awaiting trial. It was rebuilt in the 1730s as part of Giacomo Leoni’s works to the house.

Leoni played up its fortress-like appearance but also made it more hospitable, possibly so that it could be used as a banqueting room. Later still, the Cage became a home for estate workers

Built from stone quarried on the estate, Paddock Cottage sits high in the south of the park. The interior is plain apart from a decorative heraldic panel, the coat of Arms of which is that of Sir Piers Legh IX.

Paddock Cottage’s position, with direct sight line to the Cage, and ornate over mantle implies building was used for ‘showing off’ to guests – possibly used for dining after the hunt.

The Lantern is another Lyme landmark. The top part of the sandstone tower is believed to originally have sat above the north archway of the house and was probably placed on the hill next to the woods in the 1720s. The view from the Lantern looks out over the park and the Cheshire plain. It is said that if Lord Newton could see the Lantern clearly from the Dining Room, it was good enough weather for hunting.

For more information and to discover what’s happening at Lyme click here: 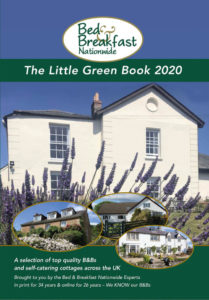