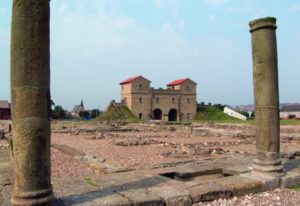 Standing above the entrance to the River Tyne, Arbeia South Shields’ Roman Fort guarded the main sea route to Hadrian’s Wall. It was a key garrison and military supply base to other forts along the Wall and is an important part of the history of Roman Britain.

Through the course of history Arbeia has had several guises; from the Roman Emperor’s HQ for the Scottish invasion to a busy cosmopolitan port. It’s hosted dramatic tales of murder, fire, and holds the key to ancient love stories. It was a huge supply base for the Roman army, home to 600 Roman troops and is said to be the birth place of the Northumbrian King Oswin.

It’s also a UNESCO World Heritage site with the finest full-scale Roman reconstructions in the country showcasing some of the most significant finds from that time.

Step inside & back in Time 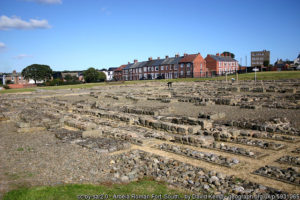 Step into the fort and immerse yourself in the world of the Romans right in the heart of South Shields. Explore inside the full-scale reconstructed Roman buildings including the West Gate, Commanding Officer’s house and a soldier’s barrack block, and see one of the finest collections of finds from Roman Britain all found in and around Arbeia.

Stories are brought to life at Arbeia through a variety of events and displays including gladiator battles, falconry displays, Roman re-enactments, storytelling and more. 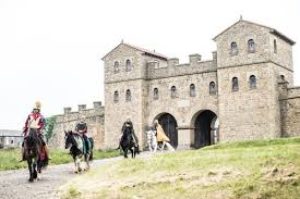 The imposing West Gate is one of the first things you notice walking up to Arbeia.

This iconic building has been reconstructed using research that was undertaken following excavations at Arbeia.

It stands where it originally existed during the Roman occupation of Britain.

Explore the towers to discover the history of Arbeia from prehistoric times right up to the present day. Discover the model of the Fort and the Roman armoury, and head to the top of the Gate and feel what it was like to be a soldier on duty guarding the entrance to the River Tyne.