Visiting Staffordshire, Don’t miss out – The Potteries of course but also enjoy the History

Visiting Staffordshire, Don’t miss out – The Potteries of course but also enjoy the History

Pay a visit to Shugborough Hall, situated on the edge of Cannock Chase, about 6 miles east of Stafford and 5 miles from Rugeley. , it’s been called A Staffordshire paradise: a rich blend of landscape, monuments, gardens and architecture, shaped by travel and adventure. 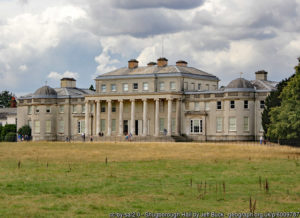 It was Home to the Anson family since 1624, Visit this important piece of heritage for a full day of discoveries.

You can explore sweeping parkland, ancient woodland and a landscape peppered with monuments. See seasonal blooms in the formal gardens, or produce in the walled garden. Head over to Park Farm and see the Tamworth pigs and Dorking chickens. Say hello to the animals, such as Longhorn cows and Southdown sheep that roam around in the fields.

In the Georgian mansion, unearth unusual treasures and experience life ‘below stairs’ in the servant’s quarters, then enter a world of glamour and royalty in the apartments of Patrick Lichfield, 5th Earl and fashion photographer. Entrance to the Lichfield Apartments will be by a limited number of timed tickets, available at visitor reception.

Let you little ones run round the play area and see if they’re brave enough to try the zip wire. Then, round off your day with a treat from the tea-rooms or cafe and take something with you to remember your day, or maybe just a tasty ice cream, from one of the shops. 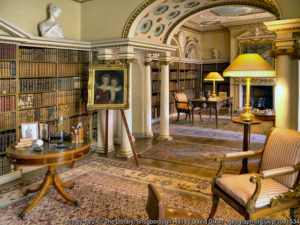 The estate was owned by the Bishops of Lichfield until the Dissolution of the Monasteries, when it passed through several hands before being purchased in 1624 by William Anson, a local lawyer and ancestor of the Earls of Lichfield It was bought for £1,000.

The estate remained in the Anson family for three centuries. Following the death of the 4th Earl of Lichfield in 1960, the estate was allocated to the National Trust in lieu of death duties, and then immediately leased to Staffordshire County Council. Management of the estate was returned to the National Trust in 2016 it is open to the public and comprises the hall, museum, kitchen garden and a model farm.

Then In 1693, William Anson’s grandson, also called William demolished the existing manor house and constructed a three-story building which still forms the central part of the hall today.

William’s elder son, Thomas Anson MP further extended the house in the 1740s, adding two pavilions flanking either side of the central block. 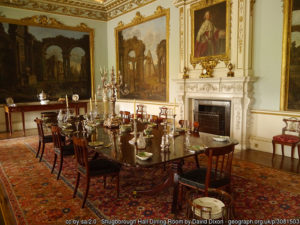 It was Thomas’s younger brother, however, who would fund these changes; Admiral George Anson, created Lord Anson in 1747 and First Lord of the Admiralty in 1751, amassed a great fortune during his naval career, and when he died he left the majority to his elder brother Thomas also died childless and the estate passed to his sister’s son, George Adams, who adopted the surname Anson

In 1806, George’s son Thomas was created 1st Viscount Anson. His son, the 2nd viscount, would be created 1st Earl of Lichfield in the coronation honours of William IV. The Earl led an extravagant lifestyle and amassed several large debts, which, in 1842, forced him to sell the entire contents of the house in a two-week-long sale.

While the 2nd Earl did much to restore the house and contents to its former glory, by the time his son inherited the estate it was heavily mortgaged.

In 1831, Princess Alexandrina Victoria of Kent, the future Queen Victoria, then 13, visited Shugborough with her mother, the Duchess of Kent, as part of an extensive tour of the country. 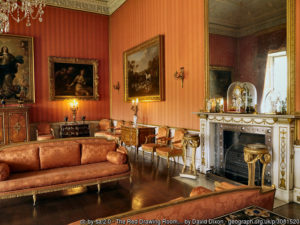 Passing from east to west through the southern part of the park is the Trent Valley Line, planned in 1845. The railway is carried under the landscaped grounds in a 776-yard tunnel and is thus largely invisible. The tunnel entrances, which are listed grade II, are notably ornamental, particularly the 1847 western entrance.

An elegant stone bridge, also from 1847 and also listed grade II, about 380 yards north-west of the Lichfield Lodge, carries the drive to the Hall over the railway. The double-track line is part of the West Coast Main Line, running north-west between Colwich Junction and Stafford.

Lord Lichfield the famous fashion photographer retained an apartment in the hall until his death in 2005, paying a nominal rent to the new owners. His successor, the 6th Earl, decided to relinquish the lease of the apartments, thus severing the family’s direct links with the estate. 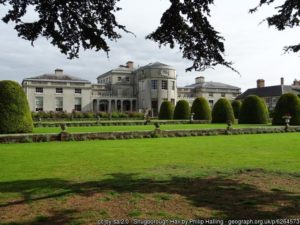 The grounds and mansion house are open to the public. The attraction is marketed as “The Complete Working Historic Estate”, which includes a working model farm museum dating from 1805 complete with a working watermill, kitchens, a dairy, a tea room, and rare breeds of farm animals.

Originally restored in 1990, the estate’s brewery is England’s only log-fired brewery that still produces beer commercially. Previously used only on special occasions, the Brewhouse has been a working exhibit since 2007, operated by Titanic Brewery.

Since 2011 the private apartments have housed an exhibition of the work of Patrick Lichfield. His cameras and lighting gear have been set up in a recreation of his studio, and there is a gallery of some of his most famous photographic subjects.

Need Specialist B & B Accommodation?

Then The Little Green Book is what you need